This Chinese Ad Caused an International Outcry; Now the Brand Is Trying to Erase It | Ad Age
Skip to main content
Sign In Register

This Chinese Ad Caused an International Outcry; Now the Brand Is Trying to Erase It

CNN asked if this Chinese commercial was "the most racist ad ever." Vibe's headline was: "There are few words to describe the racism packed into this detergent commercial."

The ad shows a Chinese woman shoving her black boyfriend into a washing machine. The cycle runs, and when he emerges, he's been "cleaned" -- into a Chinese man.

The commercial is for a detergent brand called Qiaobi, which appears to be a small startup sold mostly through e-commerce. It's also a shot-for-shot rip-off of an Italian spot uploaded to YouTube 10 years ago. (In the Italian ad, a pasty, hairy white guy is transformed into a buff black guy.)

The international press discovered the Chinese ad Thursday; a day later a search on Google News turned up over 120 articles on it.

The full-length Chinese spot was still viewable early Friday on the brand's WeChat account, where it was posted weeks ago. One of those posts had said the ad was created with help from a team of directors from popular Hunan TV, a satellite channel. (Hunan TV did not return an email seeking comment.) 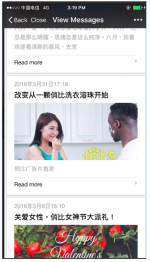 One of several posts that disappeared off the brand's WeChat account

By evening, though, the full-length version was gone. All that remained was a post that included a 5-second cut of the end of the ad, without the black actor. That post said it had appeared on big media channels, including Hunan TV, Jiangsu TV and CCTV-7. It was not clear whether Chinese TV giants ran the abridged or longer version, and whether the ads ran locally or more widely.

Ad Age contacted someone representing Qiaobi online. He declined to answer questions, aside from saying that the brand is sold online, on WeChat and in a few shops.

A woman who identified herself as an employee of an agency called Guangdong Today Media had posted about the ad on Weibo, the microblogging service. She took pictures of the spot ostensibly running in a movie theater in the central city of Xi'an, perhaps to show the ad's reach. Ad Age reached out to ask about the post; she erased it. A version also disappeared from video sites iQiyi and Youku. But copies remained, including on YouTube.

How did this ad get made in the first place? One Shanghai art director at a major international ad agency said Chinese people weren't as shocked as foreigners, partly because few know anyone who is black. "When we were children we always told jokes about black people turning white, washing their skin and turning white," he said. "So when we see this ad, it seems very usual."

On Weibo, some people said Westerners were too "politically correct." But there was also harsh criticism. A user with the handle Xu Bugouzishu wrote: "If you can't see any racism in this ad, then congratulations, you are racist!" In a Shanghai café, young office worker Lin Fei watched it and said: "I wonder how those people would feel if a Chinese person was washed into something whiter?"

Activision says the SEC is probing its workplace issues