When Actress Fan Bing Bing Announced Her New Romance On Weibo, It Became a Branded Moment
READ THIS NEXT
Pinterest launches next phase of augmented reality beauty regimen
The blurry selfie worth 6.6 million 'likes'
Credit:

Fan Bing Bing is one of China's biggest stars -- maybe the biggest. An actress and TV producer, she's been No. 1 on the Forbes China Celebrity List for three years running. In Hollywood, she plays a mutant with teleportation powers for "X-Men: Days of Future Past." In China, she's the producer and title character of costume drama "The Empress of China," which made international headlines when censors pulled the show off the air to censor out the actresses' cleavages. She has more than 33 million followers on Weibo, China's Twitter. There's even a Barbie in her likeness.

Ms. Fan, 33, has always been discreet about her love life, so it was big news when she and an "Empress of China" co-star, Li Chen, announced their relationship on May 29 on Weibo. They did it via a selfie on Weibo, with the simple caption "us." Their posts have been shared nearly 1.6 million times and generated 6.6 million "likes."

Ms. Fan, a savvy brand ambassador, didn't let her moment go to waste. And though her post appeared simple – two people wearing white shirts against a plain background -- it wasn't.

Mr. Li posted the selfie first; to retweet it, Ms. Fan used Lenovo's Moto X phone. Lenovo had announced her endorsement deal just a day earlier. (The photo itself, unfortunately for Lenovo, was apparently shot with Mr. Li's iPhone 6.) Ms. Fan also wore a $530 Cleopatra-style wig from a local brand she endorses named Rebecca, which reposted the selfie and added a link to buy the hairpiece online.

As for L'Oreal, which Ms. Fan also touts, it asked followers to guess which of two L'Oreal lipstick shades she used.

To recap: That's one simple selfie and three brand nods.

It's not clear how many endorsement deals Ms. Fan has: The official Xinhua news agency estimated that at one point three years ago it was more than 50. Lately she has starred in campaigns from Louis Vuitton to Adidas to Ganji.com, an online classified ads site. (Not to mention that "the whole story of her new romance and how it unfolded on social media looks and feels like a well-executed campaign," said Pete Lin, managing director of We Are Social Shanghai.)

"Broadly speaking the move to real-time marketing is pretty important, because it's more difficult for brands to break through with their own uniquely designed messages," said Chris Baker, managing director of Totem, a China-focused social media agency.

Like Twitter, Weibo has become a place "where when something big or important breaks people rush over to see what's happening," Mr. Baker said, and brands are taking advantage of that. (Most Chinese social chatter has moved away from Weibo to WeChat, the all-purpose social app from Tencent, and Mr. Baker believes discussion of viral trends is deeper there, though it's easier to get a big-picture view of trends on Weibo.) 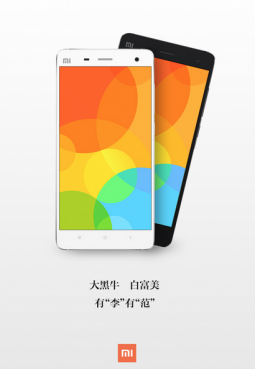 Xiaomi's re-creation of the Li-Fan selfie

There are trending topics that marketers tread carefully on; this one was pretty safe, and brands had fun.

Ms. Fan is known for her pale complexion, while Mr. Li is nicknamed "big black bull" for his strength. Xiaomi, the Chinese smartphone and tech brand, showed a black phone and a white phone snuggling.

There were also puns. Ms. Fan's given name, Bing Bing, literally means "ice ice." McDonald's showed two icy smoothies posed one in front of the other with the caption "Ice Ice Awesome." In Chinese, the slang word for "awesome" uses the same character as the word for Mr. Li's nickname, bull.