FCC Chairman Ajit Pai is preparing to overturn Title II — the rule imposing net neutrality — and companies are fighting back.

Removing ad protections, opponents argue, puts the power in the hands of internet providers like Comcast and Verizon — essentially handing them the keys to run the web. That could mean slower load times and the blocking of apps and services.

The list of companies goes on: Netflix, Twitter, Bandcamp, imgur, Vimeo, Weebly. In all, according to battleforthenet.com, 230 major sites joined the cause.

The ACLU displayed this pop-up when entering the site. 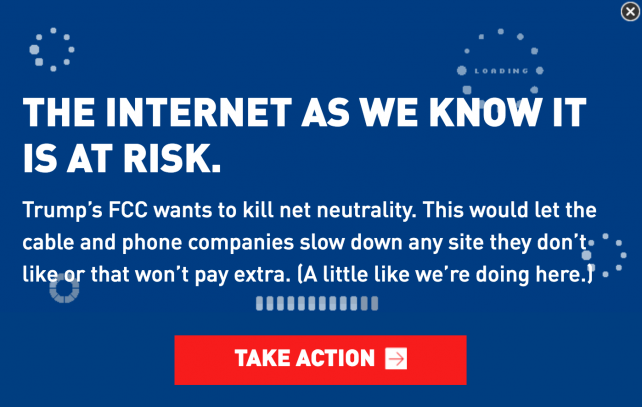 And Change.org had this alert band at the top of its page.

The struggle is real, but not new: Media and tech companies have backed an open internet for years. In 2014, when Obama-era FCC Chairman Tom Wheeler tried to roll back net neutrality, widespread outcry from websites and citizens played a part in maintaining current rules. A number of sites got together to black out their pages and institute an "internet slowdown" day to support stronger laws.

Today, the technology subreddit is hardly being subtle about it.

Indeed, Reddit's top two posts are titled, "We need your voice as we continue the fight for net neutrality" and "Your online gaming is once again at risk. Net Neutrality needs your help."

Media companies are taking various approaches to this battle. Vimeo's main display is an educational video on net neutrality. Twitter is more subtle, with #NetNeutrality showing up as a sponsored hashtag in users' trending topics bar.

It's always nice to see that the internet can come together.