Boomers -- Yes, Boomers -- Spend the Most on Tech

Due to Broad Demographic Grouping Problems, Biggest Misconception About Group Is That They're All the Same
READ THIS NEXT
Why data will change health care as we know it

YORK, Pa. (AdAge.com) -- Marilynn Mobley has a desktop at work, a laptop at home, a netbook for travel, an Android smartphone and just last week she bought an iPad. She time shifts all her TV viewing using DVRs and enjoys watching Blu-ray movies at home. She's also 53 years old. 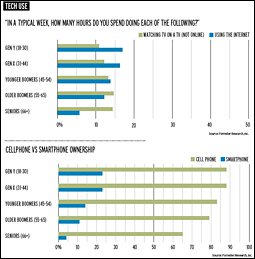 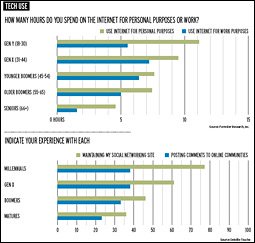 "The misconception that boomers do not appreciate tech crosses all generations. I've heard it from fellow baby boomers who say, 'Wow, you're so into technology,' and on down to 20-year-olds who are also surprised," said Ms. Mobley, a strategic counselor for Edelman in its Boomer Insights Generation Group.

However, she's not nearly as unusual as the media portrays. Boomers are almost as likely as Gen X and Gen Y to own computers, access the internet daily, own mobile phones, DVRs, digital cameras and GPS systems. And while boomers do trail in areas such as early adoption of new devices and services, many of those generation gaps are closing.

"It's actually a myth that baby boomers aren't into technology. They represent 25% of the population, but they consume 40% [in total dollars spent] of it," said Patricia McDonough, senior VP-analysis at Nielsen Co.

In fact, spending on technology is one area where boomers are ahead of their younger counterparts. The 46- to 64-year-old group now spends more money on technology than any other demographic, according to Forrester Research's annual benchmark tech study. That includes monthly telecom fees, gadget and device spending, and overall online purchases. They averaged around $650 spent in online shopping vs. Gen X ($581) and Gen Y ($429) over a three-month period.

And adoption rates of the tech areas where they do lag are soaring. In 2000, baby boomers made up 28% of the internet population and accounted for just 24% of the traffic on a typical day, according to Pew Internet & American Life Project data. But by 2010, those percentages had climbed to 34% of the internet population and 32% of all traffic. Ten years ago, only a quarter of boomers went online every day; in 2010 that number jumped to 70%.

Along with the timeless youth platitude that "old people just don't get it," the misconceptions about boomers and technology incompetence may also be a demographic grouping problem.

The age range in many market-research surveys and studies, for instance, often puts the oldest demographic group at 50 and older. However, Robert DiLallo, director of Grandparent Marketing Group, New York, said that designation is too broad.

"People who are 65 and older were at the tail end of their careers when the real tech revolution began and did not get introduced to the internet that way," he said. "I'm 60 years old, but I'm no more like a 70-year-old in my tech use than I am an 18-year-old."

Boomers also use their phones for more than calling, vs. seniors. According to Deloitte's annual media research, 66% of boomers send text messages, trailing Gen X-ers at 80% and millennials at 88%, but way ahead of the 28% of matures (64-plus) who text. Another 37% of boomers have accessed the internet by phone, just behind Gen X at 42% and millennials at 55%, but again ahead of matures at 20%.

Grandparent Marketing Group research notes that the boomer generation and millennials are strikingly similar demographic groups. Both number around 80 million and both grew up in some of the U.S.'s most prosperous eras ('50s/'60s and the '90s).

The key for marketers to reach boomers is not to dismiss technology as irrelevant to them, but rather to figure out what technology they prefer.

"Which platforms resonate with which demographic?" said Ed Moran, Deloitte director of insights and innovation. "Take gaming for example. For male mature users aged 60 to 75, the PC is the preferred platform, while for the under-15 age group, it's consoles or the iPhone."

Ms. Mobley concurred: "I think the biggest difference in the way boomers use technology vs. the younger generations is that we tend to see it as a way to get something done -- whether that's something at work or staying in touch with friends and family. Gen X and especially Gen Y just see it as a part of life."