RB, Lever Add Interactive Games, Digital Deals to Online Branding Efforts
READ THIS NEXT
With cookies on the way out, brands search for solutions

In Laurent Faracci's ideal world, "100% of our digital media would have a call to action."

After studying effects of brand advertising on e-commerce sites and elsewhere, the U.S. chief strategy and marketing officer for packaged-goods giant Reckitt Benckiser believes that "the return on investment is three times better when you do." 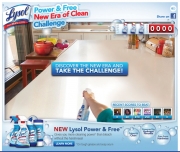 That's a back-to-the-future move for CPG marketers, which embraced the "click here" and "enter to win" admonitions of early internet ads but focused more on branding during subsequent decades. Recently, however, they've embraced anew the "call to action," thanks to increased focus on accountability, e-commerce and social interaction. Perhaps most important, the CPG industry, which has long put most of its true marketing budget into promotions, is moving toward offering digital deals.

Lysol Power & Free ran a Facebook program last year whose call to action was getting women to play a first-person-shooter game using a bottle of cleaner to zap germs. It encouraged them to post their scores, invite friends to play or share other content about the product, said Chris Pape, exec creative director at Genuine Interactive, Boston.

The campaign purposely left out an offer, to see how well it could work without one, Mr. Pape said. Ultimately, it drew three earned impressions for every paid one.

"The key principle is: If people are taking action, they're retaining information better than if it's passive," he said. "We're big fans of adult-learning theory, which says if you're passively watching information, it's not really being sent to long-term memory."

Social media has created new ways for advertisers to seek a call to action. Besides the share and the "like," Unilever in December tried a promoted tweet-to-purchase format for Tresemmé that took people directly to Amazon to close the deal. But Unilever VP-global media Rob Master said the company still uses a mix of call to action and branding ads online.

A 2010 study by WPP's DynamicLogic found no link overall between a call to action and effects on recall or brand favorability, but did find that call-to-action digital ads do better on purchase intent for CPG and travel advertisers. Across industries, ads asking people to "send something" or share doubled brand favorability and purchase-intent scores compared with the average ad.

That was a key element in a recent campaign by Kimberly-Clark Corp.'s Huggies. Using an ad format from Media Multiplyer, an offshoot of WPP's Rockfish Labs, Huggies offered a $2-off coupon good on Amazon, bumping the deal to $3 for people who clicked within the unit to share the offer in social media or email. Nearly half the moms who clicked also shared.

"We absolutely want to have moms do something, to share information," said Jason Rottier, e-commerce experience officer for K-C.

Media Multiplyer moves beyond coupons to let people choose a retailer and close the deal within the ad unit, which provides accountability.

"The economy is driving people to think about something that isn't just going to drive an impression, but will drive a visit or sale or trip," said Dawn Maire, president of Media Multiplyer.

Call to action is a big part of CPG digital advertising largely because much of the budget is coming out of promotional buckets, said Gian Fulgoni, chairman of ComScore. Accounting rules don't count such spending as marketing, but CPGs spend 67% of their all-inclusive marketing dollars on retailer trade promotion, he said, citing data from Kantar and SAP. Media advertising of various forms makes up only 22% of spending, while consumer promotion -- largely around distributing coupons -- makes up 11%.

"Almost half of digital ads in CPG have some kind of promotional message," Mr. Fulgoni said, compared with 8% of TV ads.

What's a better call to action than a coupon?

As Huggies targets millennial moms, it's moving toward digital couponing, according to Kimberly-Clark's E-Commerce Experience Officer Jason Rottier. But K-C isn't alone, nor is the shift limited to diapers. The migration of consumer-products couponing into digital appeared to hit an inflection point late last year.

Though freestanding newspaper inserts remains the dominant coupon media, Kantar Media found a 46% increase in digital-coupon events by CPG companies last year, with the trend accelerating as the year progressed.

But Valassis, one of the two big publishers of freestanding inserts along with News Corp.'s News America, is stepping up its digital efforts, including a social-sharing app that can be used on Facebook. Jim Parkinson, chief digital and technology officer of Valassis, believes aggressive efforts by Kroger and Safeway behind load-to-loyalty-card offers are fueling a shift to digital. — Jack Neff