Entertainment, Banking, Other Apps Seen as Creating 'Stickiness' for Day When Apple Exclusivity Expires
READ THIS NEXT
What the TikTok ban means for brands

YORK, Pa. (AdAge.com) -- What happens when AT&T no longer has exclusive rights to Apple's iPhone? Well, it seems to be preparing for that day by creating branded apps as one of the ways for its estimated 15 million iPhone customers to remain with the carrier rather than switch. 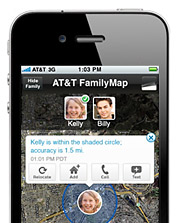 Apps like 'Family Map' could help convince customers to stay with AT&T after its iPhone exclusivity has expired.
AT&T currently has about 20 iPhone apps, but thousands more of its own and third-party developers in its AT&T Media Mall. Among the utility apps -- ones that track minutes, and network-specific apps that track family members -- are less expected local apps built around its Yellow Pages ownership, including Have2Eat, Have2Drink and Have2P; entertainment apps such as a 2010 Olympics information and entertainment app; and even a banking app, Mobile Banking on AT&T, that aggregates and helps customers manage bank, credit union, and credit-card accounts.

"I think we're all seeing the writing on the wall that eventually someone else is going to have the iPhone too, but if AT&T has five or six apps that a customer really likes and those are only with AT&T, it will at least give them pause when thinking about switching to another carrier," said In-Stat analyst Frank Dickson. "Customized apps that you use every day create stickiness. Customers don't know what 4G is or what those coverage maps really mean, but they do know they've got three apps that they use every day and they know they want to keep those."

Mark Collins, senior VP-data and voice products, AT&T Mobility and Consumer Markets, said AT&T is focused on building apps across all phone makers' platforms that bring value and help minimize churn. He said that when an AT&T customer stores its social networks, photos and videos on AT&T and uses, for instance, its "Family Map" app that locates phones on the same plan, "they're much more likely to stay with us."

Some may not seem like a logical fit at first, but Mr. Collins said apps like banking fall into a category of a "few that really matter" when it comes to serving customer needs.

"This is a whole new area for carriers. AT&T and Verizon, and Sprint as well, are the gatekeepers. They're the ones who allow two parties to talk whether that's two friends, or a customer to a bank, or a doctor to a patient," said wireless analyst and consultant Jeff Kagan. "We're in the first few quarters of what will be the next 10 or 20 years of apps. ... AT&T needs to be perceived as a leader in the smartphone space and in the app world."

And customers do still turn to carriers for apps, in spite of the buzz around online shops such as the App Store and Android Market Store. A recent Nielsen App Playbook survey found that more than half of all app users downloaded through carrier app stores. However, the Apple App Store still led the competition with 25% of those surveyed using it; followed by the BlackBerry App World at 16% and then the carriers: Verizon's Application Store at 15%; AT&T's store at 12%; Sprint at 10% and T-Mobile at 8%.

Of course, for now, AT&T has a unique advantage. "You won't see T-Mobile, Verizon or Sprint on the Apple App Store, because everyone that has an iPhone is an AT&T customer," said Peter Farago, VP-marketing at Flurry.

Indeed, Mr. Collins said AT&T will create more apps for iPhone, providing they make sense and create value for its customers. "None of the carriers have indicated that they really want to get into the app business -- yet. Five years from now, that may be different," Mr. Kagan said.

But no matter how many iPhone apps AT&T eventually churns out, careful vetting will be needed. "With AT&T, the qualities of the brand are reliability, quality of service and connecting people, but they're not really known for being cool or having cool fun games, so it could become a brand issue. You have to stay true to your brand," said Julie Ask, analyst at Forrester Research.

~ ~ ~
Correction: This story incorrectly stated that there are 100 million AT&T iPhone customers. Analysts have predicted that 100 million iPhone devices will be sold by 2011, the year it is expected the AT&T iPhone exclusivity will end. However, there is no direct connection between iPhone units sold and the number of AT&T accounts. AT&T does not release the number of its customers who use iPhones. Outside analyst estimates put the current number of AT&T customers using an iPhone at around 15 million.