Digital Revenue Up Across the Big Four

Publicis Leads the Way in Percentage, While Omnicom Sees Most Money
READ THIS NEXT
Leveraging disruption: innovation, experimentation and the power of AI

While that might not seem like a lot, digital's portion of Big Four revenue was higher than its share of worldwide media spending: Internet advertising accounted for 10.3% of 2008 worldwide ad spending, according to Publicis Groupe's ZenithOptimedia. The higher percentage at big agency companies reflects how digital pervades every communications discipline.

Ad agencies, too, are doing more in digital. Omnicom's Goodby, Silverstein & Partners, San Francisco, generates a majority of its revenue from digital work.

More digital PR
Digital accounts for a growing share of revenue at the Big Four's public-relations agencies, which have moved aggressively into social media.

Quantifying just what is digital isn't easy given that, optimally, every communication will include digital.

And it isn't immune from recession. Publicis' signature digital agency, Digitas, cut 2% of staff in December in response to the troubles of two key clients: American Express Co. and General Motors Corp.

But the digital drive continues, and agency companies are moving with the market. 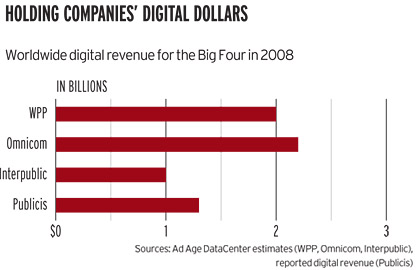