Two of the biggest online video services -- Google's YouTube and Facebook -- have quickly become primarily mobile video services and expect mobile to be the future of video. But it may take some time before advertisers meet them there.

Still a nascent market, advertisers are expected to up their U.S. mobile video ad budgets by 70% this year to $2.62 billion, according to new estimates from eMarketer. That's roughly one-third of the $7.77 billion brands are projected to spend this year in the U.S. on digital video ads overall, but only 9% of the money they'll drop on mobile ads overall. 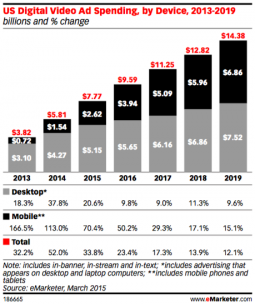 But a pessimist might harp on two things. First, in five years mobile video ad spending still will not have overtaken desktop video ad spending. That's despite the fact that today's dominant online video service YouTube already generates more video views on mobile than on desktop. Second, the amount of people watching videos on their smartphones, and the amount of money advertisers are willing to spend to get in front of that audience, is significantly disproportionate. That has been an issue with mobile ads for years.

This year U.S. adults -- not the teens that are already considered glued to their smartphone screens -- will watch 39 minutes of video daily, on average, on their smartphones and tablets. That's the majority of the 76 minutes daily they're expected to spend watching video across all digital devices, which includes internet-connected TVs, desktop computers, tablets and smartphones.

"As that audience continues to ramp up, by no means is ad spending necessarily matching that demand. That's a big gap there that we're going to have to figure out how to solve," said eMarketer analyst Jeremy Kressmann.

So why are advertisers hesitating to move their digital video budgets to mobile when audiences have already migrated?

"There's a disconnect right now between ad buyers of mobile video and ad sellers," Mr. Kressmann said. "Ad sellers have the particular standards that they put out there for mobile video -- of which there are many [and] probably just as many metrics -- but ad buyers really are thinking about video very much in a television mindset."

In particular, advertisers are accustomed to buying TV ads based on gross ratings points (GRPs), which is a function of what share of the intended audience saw an ad and how many times they saw it. Nielsen and comScore have developed digital analogs to the GRP, but many mobile video ad sellers split between selling ads based on engagement metrics (like how many people click on the ad), and impression-based metrics, (like completed views), Mr. Kressmann said.