Apple's new iOS update released yesterday included a new batch of emojis: tacos, unicorns, popcorn and a middle finger, among others in high demand. But one of them, a seemingly low-key black-and-white eye inside a speech bubble, is the first emoji with a cause: to stop cyberbullying.

The emoji is part of a new digital campaign, called "I Am A Witness", created pro bono by San Francisco agency Goodby Silverstein & Partners with the Ad Council and Adobe, Apple, Facebook, Google, Johnson & Johnson and Twitter, to help empower teens that witness bullying to speak up and help victims. The campaign will be backed by $8 million in donated media, with celebrity endorsements, activations in teen-focused platforms like Tumblr, Snapchat, Instagram, Vevo, Kik and Whisper, among others, as well as a 30-second PSA spot on TV.

The idea started when Ann Lewnes, Adobe's chief marketing officer, promoted a screening of the documentary "Bully" to the agency's staff in February. "We watched this gruesome scene of a boy being bullied in a school bus full of kids, and one of our strategists said: 'What about the other kids in the bus?'" said Kate Baynham, Goodby copywriter, who worked on the campaign.

From that insight, the agency researched and discovered that while most campaigns are about consoling victims or shaming bullies, there wasn't much to help to get teens that silently witness bullying to speak up.

"Our research showed that 60% of bullying will stop in 10 seconds if someone intervenes," said Ms. Baynham, adding that teens say they want to stand up, but they don't know what to say. 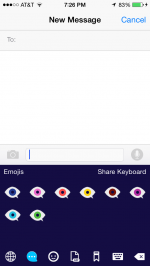 And when that happens, what do you use? An emoji, of course. Art director Hanna Wittmark and Senior Designer Angie Elko teamed with Ms. Baynham to create the symbol of the eye inside the speech bubble, and proceeded to submit to the Unicode Consortium, only to find out that new submissions can take up to two years to be accepted. But in a meeting with Apple, they learned that since the speech bubble and the eye emojis already existed, it was only a matter of combining the two approved codes, so there was a chance that the anti-bullying emoji could be approved in record time. Two weeks ago the team learned that the emoji was good to go and would be rolling out with iOS 9.1.

During the wait, the team worked on the rest of the campaign, which included a special keyboard available for iOS and Android with several options of colored eye-bubble emojis, animated GIFs and stickers, social media profiles and a special website created in Tumblr. That site contained a repository of images to be shared, resource links and an interactive animated video showing a day in the life of a boy who suffers bullying. The video was created by Moonbot Studios, with original score by composer Mark Mothersbaugh.