It's a move that could eventually put the two companies in more direct competition for real-time ad budgets, an area of heightened attention for marketers recently, but Facebook won't be profiting from its hashtags out of the gate. Advertisers won't be able to target people posting hashtags about a particular TV show or live sports event, and they won't be able to sponsor a hashtag in the vein of promoted trends on Twitter. 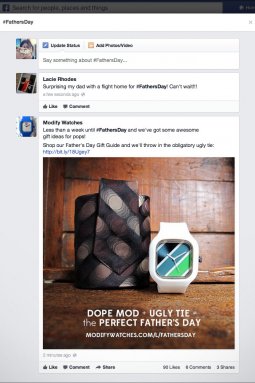 Upon clicking on a Facebook hashtag, users will see a box that layers above the Facebook page they're currently on and casts it into shadow. In the box, they'll see the people and pages in their network that have used the hashtag in chronological order. They can also see mentions from people outside their network whose Facebook pages are public, but the focus is on people or brands that users have chosen to connect to.

It remains to be seen what Facebook will do to spur adoption of hashtags, but cross-posting from other networks will provide some viral hooks. For example, hashtags in tweets that people also set to publish on Facebook will open a Facebook hashtag page when someone else in the social network clicks on it.

Ultimately, Facebook wants to be thought of as the second screen as much as Twitter is. It has data to support that contention; there are between 88 and 100 million Americans using Facebook every night during prime time hours. And the "Red Wedding" episode of "Game of Thrones" earlier this month had 1.5 million mentions, according to a Facebook blog post.

However, the tricky part for Facebook is the lack of visibility into its data. While millions of people may be talking about "Game of Thrones" or the Oscars on Facebook, a relatively small percentage of them are doing so publicly, which is why business intelligence startups that focus on making social data actionable for marketers focus on Twitter and its rich deluge of public data. In light of that, another potential revenue stream from hashtags is an analytics product that would shed light on how hashtags are trending in short time increments across the network.

It's also possible that Facebook's foray into hashtags could provide a useful signal for its "graph search" product introduced in January, which is reliant on the "like" as an expression of interest. Likes are flawed signals, since users sometimes click on them arbitrarily or to satisfy a social obligation. But posting with a hashtag could be seen as a more tangible expression of affinity and could thus help to make graph search into a useful product.

In typical Facebook fashion, hashtags will first roll to a small percentage of the Facebook network so that the engineering team can evaluate how they're working before making them available to the masses.