Mark Zuckerberg Says It Three Ways: We Are Not Building a Phone

Facebook has had a tough run as a public company, but CEO Mark Zuckerberg said the company remains focused on its biggest opportunity, and that is mobile.

In his first public comments since the IPO in June, Mr. Zuckerberg said while the share price has been "disappointing," he's more focused on how the company will be judged in the next five years and that is about how well it can fulfill its potential on mobile devices. 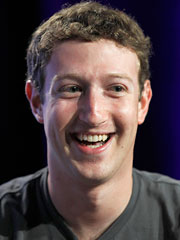 "Six months ago, we were in a bad place in mobile," he said, mostly because the company focused too long on building out its apps for the mobile web, rather than building native versions of the Facebook app for Apple and Android devices.

"There is no doubt we had a bunch of missteps on this," he said. "But we've transitioned now and we are a mobile company."

"I basically live on my mobile device," Mr. Zuckerberg said, as if to drive that point home. He added that he composed his oft-quoted founders' letter in Facebook's IPO filing -- the one that said "we don't build services to make money; we make money to build better services" -- on his mobile phone.

The Facebook founder handled his 30 minutes on stage at TechCrunch Disrupt with the famously prickly founder Michael Arrington with considerable poise compared with his sweaty, stuttering stage appearances of the past. He clearly had an agenda to convey Facebook's opportunity in mobile devices, and he largely achieved it.

Mr. Zuckerberg conceded some strategic mistakes, though not in how the IPO was handled or whether the stock, down more than 50% from the IPO, impacts the company's ability to pursue its mission. Facebook shares inched up more than 3% in after-hours trading.

He also parried several questions from Mr. Arrington about the existence of a project to build a phone. "It's so clearly the wrong strategy for us," he said. "Let's say we built a phone. Maybe we could get 10 or 20 million people to use it. It wouldn't move the needle for us. We want to build a system that is deeply integrated into every device people want to use."

But he did say that Facebook has a team working on search, which puts it on collision course with arch rival Google, which has spent the past few years attempting to add social signals to search with its G+ social network.

Facebook already gets billion search queries a day "without really trying," he said, mostly users looking for people or content on Facebook. But Mr. Zuckerberg said the ambition for search is bigger. "Facebook is pretty uniquely positioned to deliver answers; what sushi restaurants have your friends visited in New York, and liked? These are queries you could do on Facebook that you couldn't do anywhere else."

He conceded that the company has been slow on product over the last six months as it reorganizes developer teams to focus on mobile, but he said that the pace would begin to accelerate, including a new Android app.

"People underestimate how well we are doing in mobile," he said. "We already see that mobile users are more likely to be daily active users than desktop user."

He also said that that ultimately Facebook will make more money from mobile than from desktop PCs. The company is expected to earn $4.2 billion from advertising this year, mostly targeted at PC users, according to eMarketer, but mobile revenue is expected to grow explosively over the next few years.

"Mobile is a lot closer to TV than desktop," he said, meaning they have to be full-screen and part of the experience, rather than boxes in the right column as they are on the desktop. "What we're seeing now with the early mobile ads is they perform better than right-hand column ads on Facebook."

He said he actually prefers when Facebook is being underestimated, and clearly believes now is one of those times. "It gives us latitude to go out and make big bets and do things that excite and amaze people," he said.

"Facebook has not been an uncontroversial company in the past," he said. "People here are fairly used to the press saying good things about us and saying bad things about us."