Overall Revenues To Hit $31 Billion This Year, And Facebook Is Set To Claim Nearly A Quarter
READ THIS NEXT
Google urges holding companies to buy analytics firms amid loss of talent

According to the latest eMarketer forecast, released on Wednesday morning, mobile ad spending worldwide grew by 105% in 2013 and is on pace to expand to $31.5 billion this year. And the two Internet giants, Google and Facebook, are increasingly taking the lion's share---the pair netted 67% of mobile ad revenues last year, up from 58% in 2012.

Today's report marks yet another adjustment from the research firm, as mobile ad dollars balloon far faster than expected. The final spending figure of $18 billion is nearly double the firm's estimates from just four months ago.

Much of the tweaking is due to Facebook, whose share of net revenues more than tripled, to 18%, in 2013, only its second year in the mobile ad business.

During 2014, Facebook is projected to claim 22% of all mobile ad bookings, with revenues of $6.82 billion. In December, 2012, eMarketer predicted the social network's 2014 mobile net revenues would barely topple $1 billion.

By the end of this year, Facebook will also be a majority mobile company. Its share of net revenues from mobile reached 45% last year, according to eMarketer's internal calculations. This year, it's projected to cross 63%. 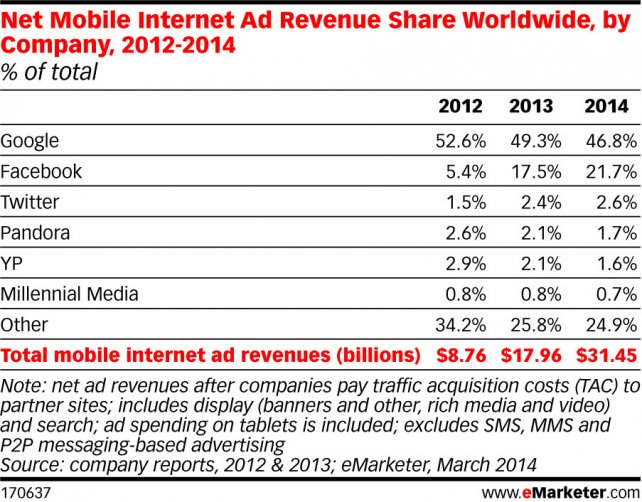 The company's shift is largely following its users, who are steadily switching from desktop to phones. In 2013, Facebook's overall ad revenues tipped globally, with a majority coming from outside the U.S., and those users skew mobile. eMarketer also weighed prospective gains as Facebook begins cashing in on its popular Instagram platform, which inked its first ad agency deal, with Omnicom, for $100 million in early March.

Facebook has taken advantage of the rising price rates of mobile ads and learned to deploy them tactfully, said Martin Utreras, senior analyst, eMarketer. "They've been very careful in terms of providing a better measurement and not overwhelming users with the numbers of ads," he said. "That's paid off."

Despite the growth of its competitor, Google remains solidly in the lead, although its share is slipping. Like Facebook, Google's percentage of ad revenues from mobile is expected to climb; eMarketer predicts mobile will cover more than a third of the net digital revenues for the company this year, up from 23% in 2013.

Twitter, too, showed noteworthy expansion last year, surpassing Pandora to slip into the third slot in revenues. And the company's growth this year is expected to beat the overall market.

Still, the newcomer's share remains miniscule. One of the emerging trends in the mobile ad business, said Mr. Utreras, is further consolidation. For contenders outside the top five, the slice of the pie is only growing thinner.