With CPG Summit, Social Network Seeks to Prove It Speaks the Language
READ THIS NEXT
Google thinks it may have found a replacement for third-party cookies

Can Facebook crack the consumer-packaged-goods ad market? If so, it could hold the key to the social network's ultimate success as an advertising medium.

CPG accounted for 12.5% of measured ad spending in 2011, as measured by Kantar Media. But while there are no publicly available data on how much CPG spends on Facebook, the industry likely punches well below its weight there. 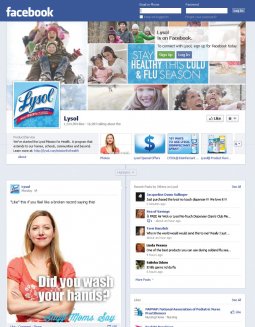 Lysol Facebook page
The Interactive Advertising Bureau estimated CPG spent only 5% of all outlays on digital advertising in the first half of 2012, and its digital spending rose only 4% compared with 14% growth overall. ComScore studies in recent years have found the CPG industry spends much more than any others on "socially enabled" digital ads that seek to direct users to their Facebook fan pages. But those ads are distributed outside Facebook, and ComScore data in 2011 suggested CPGs actually allocated less of their digital spending to Facebook than advertisers generally.

In an effort to build its credibility with the highly analytical industry, Facebook held its first CPG Summit in New York Jan. 17. And while Advertising Age got access only to the final portions of the summit, it clearly showcased some of Facebook's growing analytical capabilities and new Global Head of CPG Marketing Erin Hunter, a veteran of Procter & Gamble Co. and ComScore who came to Facebook four months ago.

She's one of several recently hired vertical chiefs at Facebook in industries that also include automotive, financial services, gaming, retail, eCommerce, technology, telecom and travel.The CPG Summit followed a recent event for financial services, with two more CPG events set for next month in London and Hamburg and additional industry events the next six months for travel, ecommerce, retail and gaming.

Just because financial services and CPG came first doesn't mean they're the most important, said Facebook spokesman Adam Isserlis, who said it was more scheduling logistics. That said, he noted that CPG represents 45 of the top 100 global advertisers and 35 of the top 100 in the U.S.

So Facebook is out to prove itself, and Mr. Isserlis noted that across more than 60 studies of offline sales lift from Facebook campaigns for CPG brands, 70% of cases showed a return of three times or greater in sales per advertising dollar spent. 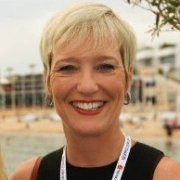 Among other things, Facebook used the event to showcase its "Custom Audiences" program rolled out last fall, which lets marketers upload their customer-relationship-management databases to target messages to their consumers on Facebook by, for example, matching up email addresses. Examples included targeting Facebook ads on a timed basis for "Saturday shoppers" or people at the midpoint of their pet-food purchase cycles.

Such targeting is possible through the CPG companies' own databases, which often include information culled from data on offline shopping patterns or promotion redemptions, "all in a privacy-sensitive and compliant way," Mr. Isserlis said.

Up to now, Facebook's relations with advertisers -- in and outside CPG -- have been mixed.

Publicly, most CPG and other advertisers have lauded the social network and its potential as an advertising vehicle, including such major advertisers and client advisory board members as executives of Unilever, Procter & Gamble Co. and their biggest customer, Walmart. The social network reports fourth-quarter earnings on Wednesday -- news that people will be looking for.

Privately, another executive of a large CPG advertiser recently noted, with a combination of dismay and understanding the business realities, a recent shift in Facebook representatives from encouraging more frequent communication with brand fans to encouraging fewer posts and saying the only way to ensure reaching those fans is buying Sponsored Stories.

Also privately, the CMO of another company last year described a meeting between several large advertisers across industry verticals with a Facebook executive, whom the CMO described as arrogant, ill informed about advertisers and essentially asking them to fund experiments toward Facebook developing a business model.

That's not, of course, the impression Facebook is trying to achieve with the new round of marketer summits.

"It's very important to us to talk to our clients in a voice they can relate to," Ms. Hunter said. "We moved toward vertical solutions and talking to marketers with someone who has experience in the industry. ...Everything we launch will have a vertical lens when we talk to clients about it."

And the CPG marketers appeared to find value in the experience. Almost all the 170 attendees stayed until well into the 6 p.m. cocktail hour.

That means, he said, "being willing to do great things together with the right investments, which means from our side some media spending, because that's what it's all about."

He said he's learned that that internal concerns about RB advertising on Facebook being disruptive or unwanted by users aren't well founded. "If you're respectful of the platform," he said, "any category is worth sharing."