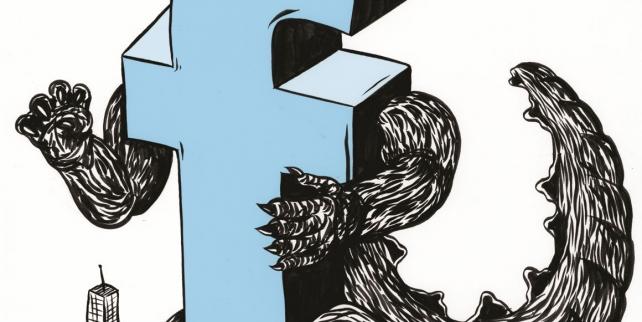 Amid a big quarter of deals and potential distraction, Facebook is showing that its core business -- advertising -- is still very much on track.

The social network's blockbuster acquisitions of WhatsApp for $19 billion and Oculus VR for $2 billion in February and March, taken together with its purchase of Instagram two years ago, make it evident that Facebook wants to be the Procter & Gamble of social.

The company is also investing in standalone products, like Messenger and Paper, in preparation for a future when social-networking habits have shifted and people check their Facebook feeds less. But what's funding those ambitious bets is the social network's ad business, which continues to grow robustly and become ever more mobile in tandem with how Facebook users access the service.

Facebook reported revenue of $2.5 billion for the first quarter of 2014, up 72% over the previous year. Net income was $642 million, up from $219 million last year. Ad revenue grew 82% year over year, reaching $2.27 billion, with the balance coming from payments and fees.

Mobile has become the dominant medium in Facebook's ad business. It accounted for 59% of ad revenue, up from 30% a year earlier and from 53% in the fourth quarter of 2013.

CEO Mark Zuckerberg laid out Facebook's strategy of developing a suite of apps -- of which core Facebook is to be one of many. "The Facebook app by itself is the furthest along, more than a billion people use it," he said. "It's at the core of our business."

As for Messenger, Instagram and WhatsApp, the emphasis for the near term will be on growth, not monetization, Mr. Zuckerberg said.

Then there are the suite of apps that Facebook Creative Labs is developing, of which the news reader, Paper, is the first. 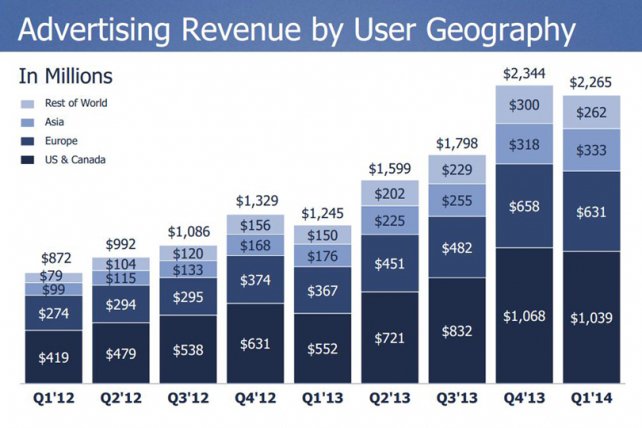 "It will probably take a few years for those to get to the stage that Instagram, WhatsApp and Messenger are at, which by themselves are probably a few years away from being big and important businesses for us," he said.

User growth
Facebook continues to add users, mostly outside of saturated North America and Europe. The total count of users who log in at least monthly grew to 1.28 billion, up from 1.23 billion at the end of the previous quarter. Almost 63% -- or 802 million -- of them are logging in daily. And for the first time, the number of monthly users on mobile devices eclipsed a billion, reaching 1.01 billion.

The social network is charging into regions where growth is still possible. Mr. Zuckerberg observed that India recently crossed the 100-million-user threshold. He also spoke of partnerships with mobile operators in the Philippines and Paraguay via Internet.org, a Facebook-supported initiative to get more of the world's population online, that brought 3 million people onto the internet.

But keeping users engaged in North America, where the market for new users is effectively tapped out for the social network, continues to be crucial for Facebook, since the company still generates much more revenue from American and Canadian users than from any other regions. Average revenue per user for North America was $5.85, compared to $2.44 in Europe, $0.93 in Asia, and $0.70 in the rest of the world.

Facebook didn't report on engagement among teen users and whether it's continued to show signs of decline.

Ad growth
Facebook is showing fewer ads but making a lot more money from the ones it places in news feed.

Facebook's average effective price per ad was up 118% year over year, according to chief financial officer David Ebersman, who's leaving the company in September. (David Wehner, who was formerly CFO at Zynga, will step into Mr. Ebersman's role in June.) He said that was a result of the adoption of news feed ads, which fetch much higher prices and have higher engagement rates than right rail ads do.

Meanwhile, total ad impressions declined by 17%, a function of increased usage of Facebook on mobile devices where there are no right-rail ads.

Facebook does have plans underway to overhaul the right rail and make it more lucrative. Earlier this month, it announced that it will widen right rail ads, put them in proportion to news feed ads, and show fewer of them.

According to social ads company AdParlor, its clients' bought right rail ads at a CPM (cost per thousand impressions) of $0.14 in the U.S. last quarter. For comparison, their average CPM for mobile app install ads in news feed was $5.52.

Mr. Ebersman, however, did caution that Facebook is likely to report lower rates of ad revenue growth going forward than it has in recent quarters. That's because the company's ad business has effectively been in hyper-growth due to the adoption of news feed and the transformative effect on its ad model.

"Our year over year comparables will get more challenging," he said.

Meanwhile, though Instagram launched its ad business late last year, chief operating officer Sheryl Sandberg said that it -- along with autoplay video ads and Facebook's "test" of a mobile ad network -- are not expected to produce "meaningful contributions" to revenue in 2014.