Walmart Takes a Page From Groupon in Facebook Promotion 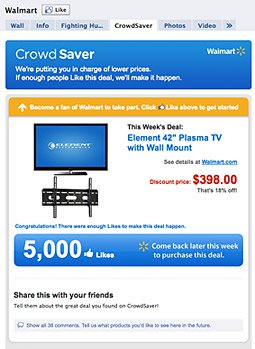 In a post on its Facebook page, the largest global retailer launched the deals app Crowdsaver, which unlocks a discount once enough consumers opt in -- much like the group deals phenomenon the start-up Groupon has made popular in recent months.

In less than 24 hours, Walmart reached the deal threshold of 5,000 "likes," which triggered a discount of 18% off a nearly $500 plasma TV with wall mount.

Crowdsaver puts "you in charge of lower prices. If the deal gets enough likes, the price drops for everyone," says the Facebook post. While not Facebook based, Groupon green-lights discounts and coupons for local businesses once a pre-determined number of people commit to an offer. Once critical mass hits, customers pay upfront, print a coupon and redeem when they're ready. For Walmart's TV, the Facebook page tells users to come back later this week to purchase.

With this group buy-in model for local deals, Chicago-based Groupon has grown exponentially over the last year to more cities. Hinting that the service could also work for national businesses, Groupon launched what was arguably its highest-profile deal with Gap in August. The half-off coupon grossed $11 million, a sum that was shared between Groupon and the clothing retailer. At the time, the service said it added 500,000 users per week on average and hit 750,000 additions after the Gap promotion.

Walmart did not immediately respond to emails and a call for comment.