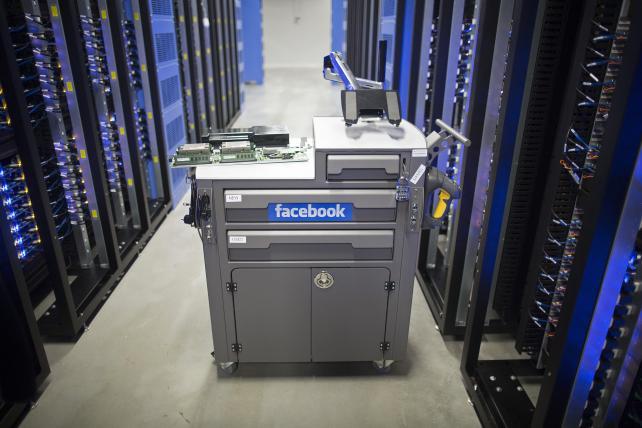 A tool and maintenance box, also known as a 'crash cart,' stands in the server hall at a Facebook data storage center near the Arctic Circle in Lulea, Sweden.
Credit: Simon Dawson/Bloomberg

Facebook may have to pay a real price for claims it invaded users' privacy: billions of dollars.

A federal judge ruled Monday that millions of the social network's users can proceed as a group with claims that its photo-scanning technology violated an Illinois law by gathering and storing biometric data without their consent. Damages could be steep—a fact that wasn't lost on the judge, who was unsympathetic to Facebook's arguments for limiting its legal exposure.

The case dates back to 2015, long before Facebook became mired in controversy over revelations that millions of its users' private information fell into the hands of British consulting firm Cambridge Analytica. It's rare for consumers to win class-action status in privacy cases. In Facebook's history, most such cases don't get that far.

Facebook has for years encouraged users to tag people in photographs they upload in their personal posts and the social network stores the collected information. The company has used a program it calls DeepFace to match other photos of a person. Alphabet Inc.'s cloud-based Google Photos service uses similar technology and Google faces a lawsuit in Chicago like the one against Facebook in San Francisco federal court.

Both companies have insisted in court that gathering data on what you look like isn't against the law, even without your permission. But under the Illinois Biometric Information Privacy Act of 2008, the companies could be fined $1,000 to $5,000 each time a person's image is used without consent.

Shawn Williams, a lawyer for the users, says it's not clear yet whether the lawsuit might prompt changes in the way Facebook uses biometric data.

"As more people become aware of the scope of Facebook's data collection and as consequences begin to attach to that data collection, whether economic or regulatory, Facebook will have to take a long look at its privacy practices and make changes consistent with user expectations and regulatory requirements," he says.

Facebook says it's reviewing the ruling. "We continue to believe the case has no merit and will defend ourselves vigorously," spokeswoman Genevieve Grdina said in an emailed statement.

The company "seems to believe" that the lawsuit should be pursued by individuals, not as a group, because "damages could amount to billions of dollars," U.S. District Judge James Donato wrote in the ruling.

The company argued each individual user could be "aggrieved" differently, and must prove that they suffered an actual injury beyond a privacy right. Nonetheless, the judge said "substantial damages are not a reason to decline class certification," because he could reduce them at a later stage of the litigation.

The class of users approved by Donato dates back to June 2011, when Facebook had an Illinois user base of more than 6 million people, according to lawyers for the plaintiffs. "Although many individuals may not have had enough tagged photos to generate a face template in Facebook's database, in January 2011 (i.e., before Facebook implemented tag suggestions for all users) the average user was tagged in 53 photos, far more than the 10 needed to generate a face template," according to a December court filing.

Privacy advocates have said the billions of images Facebook is thought to be collecting could be even more valuable to identity thieves than the names, addresses, and credit card numbers now targeted by hackers. While those types of information are mutable -- even Social Security numbers can be changed -- biometric data for retinas, fingerprints, hands, face geometry and blood samples are unique identifiers.

"I'm afraid Facebook has come down to the position of trying to carve out exceptions to that," the Democrat said, according to a transcript of the April 11 hearing. "I hope you'll fill me in on how that is consistent with protecting privacy."

The Illinois residents who sued argued the 2008 law gives them a "property interest" in the algorithms that constitute their digital identities. The judge has agreed that gives them grounds to accuse Facebook of real harm.

Facebook, which got the case moved to San Francisco from Illinois, argued the users hadn't suffered a concrete injury such as physical harm, loss of money or property; or a denial of their right to free speech or religion.

Courts have struggled over what qualifies as an injury to pursue a privacy case in lawsuits accusing Facebook and Google of siphoning users' personal information from emails and monitoring their web-browsing habits. Suits over selling the data to advertisers have often failed.

Donato has ruled that the Illinois law is clear: Facebook has collected a "wealth of data on its users, including self-reported residency and IP addresses." Facebook has acknowledged that it can identify which users who live in Illinois have face templates, he wrote.

Donato previously rejected Facebook's argument that the case had to be dismissed because the attempt to enforce Illinois law runs afoul of its user agreement that requires disputes to be resolved under the laws of California, where it's based.