Facebook's user base could approach 1.8 billion in 2017, fueled by new users in populous emerging markets.

While Facebook's user growth is tailing off in the U.S., U.K., Canada and western Europe, there's plenty of room to grow in population centers such as Brazil, Russia and India, according to new estimates by eMarketer. 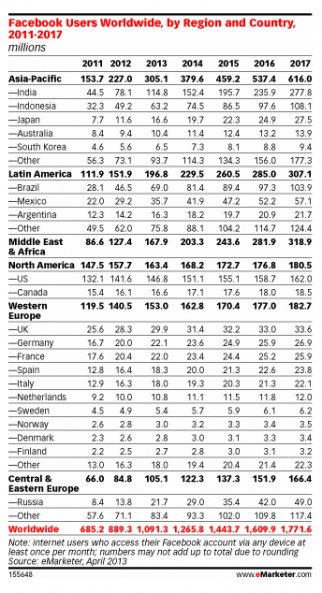 The Facebook user base in North America is expected to grow by only 3.6% this year, compared to 34.4% in the Asia-Pacific region, 29.5% in Latin America, 31.8% in the Middle East and Africa and 29.3% in central and eastern Europe. The explosive growth in places like Brazil, which is expected to grow its 69 million users this year to 103.9 million in 2017, explains why Facebook has been accelerating its business development efforts there.

The end result of these regional growth rates is that by 2017, there will be 616 million Facebook users in Asia-Pacific alone and 318.9 million in the Middle East and Africa, compared to 180.5 million in North America and 182.7 million in western Europe. India is projected to be the country with the most Facebook users at 277.8 million.

EMarketer's projections have Facebook crossing the billion-user threshold this year and reaching 1.27 billion in 2014. This diverges from Facebook's own reporting, since the social network reported accruing its billionth user in October.

The disparity is due to Facebook's inclusion of duplicate accounts and accounts created for pets in its counting, according to Clark Fredricksen, eMarketer's VP-communications. EMarketer's methodology involved an aggregation of third-party research sources, including Facebook and comScore, he said.

Even in the most mature markets, eMarketer doesn't think Facebook is quite tapped out. For example, though two-thirds of the population of the Netherlands is said to be using Facebook monthly already, that share will climb six more percentage points between now and 2017, according to the estimates. Meanwhile, the percentage of Americans using Facebook every month will rise from 46.4% to 49.6% over the next four years.

While the research hasn't foreseen any declines in monthly active users in the U.S. and other mature markets, it doesn't look at how daily active usage is likely to change. Mr. Fredricksen observed that there's evidence that teenagers and younger adults are spending less time on Facebook -- even if they're still logging on at least once a month -- but that they're largely migrating to Instagram, which doesn't generate any revenue for its corporate parent yet.

"The likely landing place for those teens is going to be Instagram, which Facebook owns, but it's counted separately in the research world at the moment," he said.