Facebook was apparently hedging its bets in the background when it tried -- and failed -- to buy the ephemeral messaging service Snapchat. Today its prize 2012 acquisition, Instagram, announced that it's launching its own take on a messaging service.

Instagram users can now send photos and videos directly to people who follow them. The sender and recipient can then converse in the comments underneath the piece of media, and push notifications containing the messages will appear if a user's phone is locked. Media sent by people who users don't follow will be sent to a "pending requests" box. 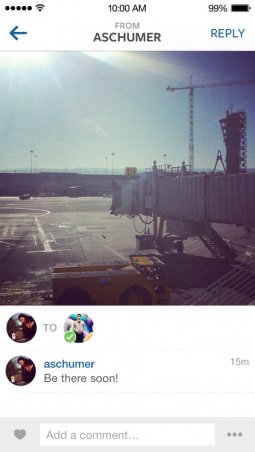 Instagram CEO Kevin Systrom said that users are effectively already using the service to communicate specific ideas with each other. He also observed that half of the app's more than 150 million users open it daily, which sounded like a jab at other messaging services. Snapchat, for example, doesn't disclose how many users it has.

As messaging apps like Snapchat, WhatsApp, WeChat and Kik proliferate and grow stickier as places for users to spend their time, the established social networks are clearly getting hungry for a piece of the action.

Facebook's mobile app currently has a prompt at the bottom of the "messages" section urging users to install Facebook Messenger, a separate app that's optimized for messaging. And Twitter made an update this week whereby users can send and receive images in their private direct messages -- a tweak that seems to have been conceived of with Snapchat in Twitter's rearview.

Today's Instagram move is aimed at user engagement and keeping people on the app for as long as possible each day. It's not connected to Instagram's revenue push, which began rolling out earlier this fall in the form of photos and videos promoted by brands in users' streams.

"I think it's way too early to talk about advertising in Instagram Direct," Mr. Systrom said. "Where brands can work to collect photos from their consumers is much more interesting of a use case right now."

Mr. Systrom also addressed the concept of "ephemerality," which is what makes Snapchat unique among messaging apps, and seemed to leave the door open to eventually introducing disappearing messages on Instagram. But he also said that Instagram is about capturing and sharing the world's moments.