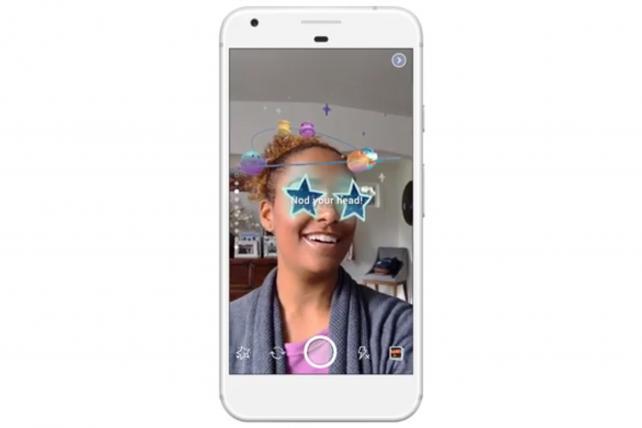 Facebook is in talks to let several Hollywood studios promote big-budget movies using new animated masks on the social network, according to media and ad executives familiar with the plans.

Facebook has been experimenting with augmented reality in a camera-centered redesign for its app that appears inspired by Snapchat. The Hollywood masks could be part of that new look, which is expected in March, people familiar with the strategy said.

Facebook Live already lets people use the filters to sync up special effects over their faces, but has not allowed brands to participate. One ad exec said that the first branded mask would be an unpaid experiment.

Branded masks are just another offering that Facebook is looking to swipe from its younger rival Snapchat, which popularized augmented reality in mobile messaging. Marketers from Twentieth Century Fox to the Hillary Clinton campaign have paid Snapchat to let users render themselves as characters from "X-Men: Apocalypse" or as the presidential candidate herself. With every borrowed concept, Facebook and its subsidiary Instagram ramp up pressure on Snapchat's parent company Snap Inc. as it prepares to become a publicly listed company.

But with every feature that Facebook or its Instagram subsidiary copies from Snapchat, the pressure on Snapchat parent Snap Inc. to reach its planned initial public offering only increases. Facebook offers marketers immediate access to much larger audiences, so unique features are Snapchat's chief weapon.

Every time Facebook introduces a product similar to something Snapchat has, it offers advertisers immediate access to much bigger audiences than Snapchat has.

"With Facebook, there's such scale there," said Colleen Leddy, head of communications strategy at Droga5. "The more you can do on Facebook, the more appealing it becomes. So based on client goals and what our audience is doing on Facebook, we'd look at all the options."

Marketers who have seen Facebook's plans only spoke on the condition of anonymity. Facebook declined to comment for this story.

Thanks to the lenses and augmented reality, Snapchat is viewed as the younger, more free-spirited platform to Facebook's more mature, even formal atmosphere. It's a dynamic that Facebook is eager to shake up.

"It's smart for Facebook to add some more fun," said Paul Marcum, president of Truffle Pig, a digital marketing agency that is partly owned by Snapchat. "If lenses can get people giddy about a brand and they are willing to play with it, that's a really good promotional stage."

Facebook invested in augmented reality technology when it bought the company MSQRD and has made it a core part of its future.

Brands are into lenses and masks because people often play with them longer than they are willing to watch a video, and they are highly sharable.

"You're not going to take action off one engagement with a lens," said Alec McNayr, co-founder of social media creative agency McBeard. "But for awareness in the entertainment space, it's powerful."

Also borrowing from Snapchat, Facebook previously put a Stories section in Instagram. It is testing a similar section in its main app, it said Wednesday.

Facebook's Stories include augmented reality special effects, but that test is limited to Ireland for now.

Stories are video diaries that last for 24 hours, meaning they're ephemeral and people feel freer to post since the videos disappear. They look different than typical videos on Facebook because they are vertical -- a format Snapchat first developed.

Advertisers can basically use the same vertical video ads they've built for Snapchat and re-direct money to run them on Instagram and, soon, most likely Facebook as well.

"This all works in Facebook's favor," said Rick Albano, executive creative director at Swift. "They've already set up a lot of measurement and data to support ad dollars being spent there."