Facebook's Ad Business Is Firing On All Cylinders, but Mum's the Word on Teens | Ad Age
Skip to main content
Sign In Register

Facebook's Ad Business Is Firing On All Cylinders, but Mum's the Word on Teens

53% of Ad Revenue Was From Mobile
READ THIS NEXT
Attn launches TikTok Studio with Unilever, Clorox, Google

Facebook had plenty of good news to share from last quarter, like the fact that mobile now accounts for 53% of its ad revenue. But it held its tongue about the elephant in the room: declining usage among U.S. teenagers.

The growth of Facebook's ad business is still being fueled by the adoption of news-feed ads that appear on desktop and mobile alike. That shift nudged the average effective price per ad up 92% over the previous year, according to chief financial officer David Ebersman, even while ad impressions dropped off by 8%.

The social network posted revenue of $2.59 billion, up 63% over the previous year. Net income was $532 million, up from $64 million in the fourth quarter of 2012, beating Wall Street expectations.

Its ad business -- which accounts for 91% of revenue, with payments making up the balance -- grew even more robustly. Revenue from advertising was $2.34 billion, up 76% over last year.

"For brand marketers, what they see is an opportunity to get in front of the largest audience at scale," chief operating officer Sheryl Sandberg told Ad Age. "And really importantly, in the last year we can measure results."

Missing teens?
Facebook didn't discuss younger teenagers -- whom Mr. Ebersman acknowledged last quarter were using Facebook less on a daily basis. (That admission sent Facebook's stock down when third-quarter earnings were reported.) When asked about teen engagement in the fourth quarter, he said, "We don't have any new data to report today."

However, company executives trotted out figures to show that overall engagement on the network is increasing, perhaps to drown out the chorus of reports that daily usage among millennials is dwindling.

CEO Mark Zuckerberg said that there were 6 billion Facebook likes per day, on average, in December, compared to 3.8 billion a year earlier. And Mr. Ebersman said that engagement in terms of time spent per user was up, though he didn't provide further detail.

"Our daily engagement continues to increase," Mr. Zuckerberg said. "Given the size of our community, we're very excited about this."

User growth
Apart from activity among teenagers, Facebook continues to extend its footprint across the globe. It now has 1.23 billion monthly active users and 757 million users who log in daily -- up from 1.19 billion and 725 million respectively in the third quarter. 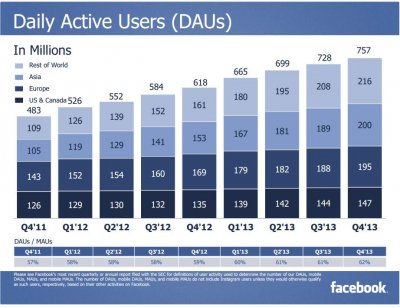 However, while Facebook continues to collect new users, it doesn't earn nearly as much money from them outside of North America, which represents an opportunity but also a challenge. The average revenue per user in the U.S. and Canada, where user growth has slowed to a trickle, was $6.03, compared to $2.61 in Europe, $0.95 in Asia, and $0.84 in the rest of the world.

Facebook ad partner Kenshoo -- which has retailers as its biggest segment of customers -- saw a doubling of the Facebook ad spend managed in its system from the third to the fourth quarter. Todd Herrold, the company's senior director-product marketing, said that clients were increasingly looking to sell their products on Facebook.

"What this dramatic growth over Q4 shows, in part, is that people are figuring out how to do direct-response on Facebook," Mr. Herrold said.