Once, the "news" on Facebook generally meant who had a baby or a birthday. But now Facebook is taking the term a lot more literally, and making itself more Twitter-like in the process by promoting real news posted by users within their feeds.

Facebook acknowledged in a blog post today that it's tweaked its news-feed algorithms to expose more links to articles from media organizations, which will be particularly evident on mobile devices. 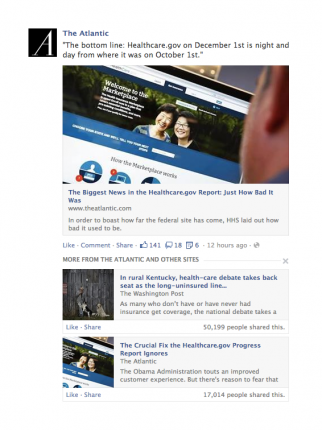 The algorithm shift is a big change to the core ingredients of Facebook, one designed to make the world's biggest social network more relevant to current events, territory that has been staked out by the much smaller but buzzier Twitter.

The announcement coincides with reports from some publishers that their referral traffic from Facebook is sharply increasing. For example, BuzzFeed reported in October that its referrals from Facebook grew 855% between September 2012 and September 2013.

The algorithmic change to expose more links only began rolling out "very recently," according to a Facebook spokeswoman. However, it could be a carrot to entice publishers to post even more content to Facebook, which it's been urging them to do.

The company's recent announcement about massive referral increases realized by BuzzFeed, TIME and Bleacher Report also prominently featured the advice for media organizations to increase the frequency of their Facebook posting.

What's implicit in the change is Facebook striving to make its news feed more like Twitter's stream -- an invaluable source for news and analysis. It's the latest in a series of product updates, such as hashtags and the promotion of public figures to see updates from on Facebook, that have moved the older social network in its competitor's direction.

It also shows a subtle shift in positioning away from the core utility Facebook once touted above all else: an environment for people to share personal updates among people they know in the physical world.

The goal of news feed is to show the right content to the right people at the right time whether it's from a close friend or a news source halfway around the world.

Every day hundreds of millions of people come to Facebook to find out what their friends have to share—the best new music they've listened to, photos from their recent honeymoon, who they plan to vote for in the next election. Each person's experience on Facebook is unique and completely personalized—akin to reading a real-time newspaper of stories compiled just for them that they can carry with them wherever they go.

By surfacing more articles in news feeds, Facebook is making its billing as a personalized newspaper much more literal. But it also runs a risk in making its service less personal. For example, an article posted publicly by someone unknown to a user but that's been commented on by her Facebook friend is now presumably a lot likelier to surface in news feed, assuming the article is deemed to be of "high quality." (Facebook intends to start distinguishing between high quality articles and meme photos, according to the blog post.)

But for someone who comes to Facebook expecting baby photos and musings from friends, the dilution of that personal content in a stream that contains more news than ever before -- inserted via tenuous social connections -- might be disconcerting.