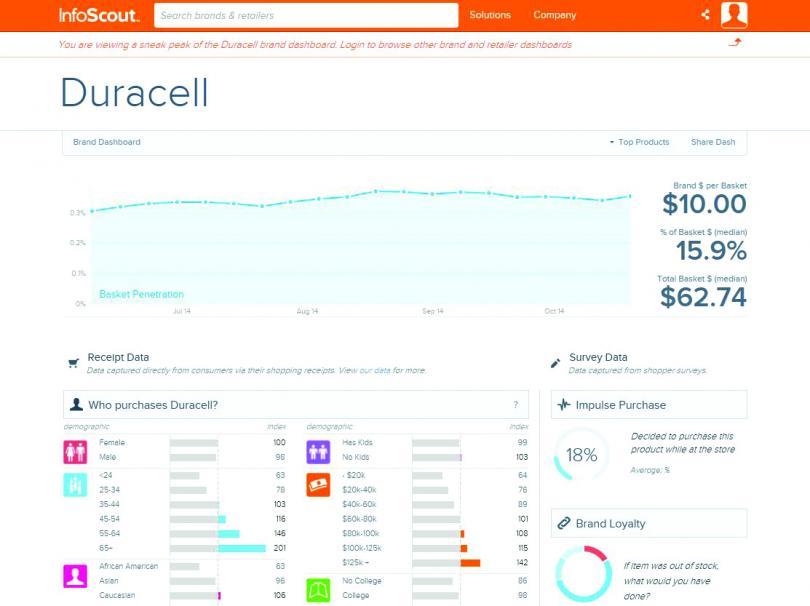 As packaged-goods companies move more seriously into e-commerce, they're finding big holes in their data resulting from online sellers failing to provide sales stats to measurement companies like Nielsen and IRI. A batch of tech startups are trying to bridge that yawning divide.

Slice Technologies began offering sales data from its panel of 2 million consumers in October. The data come from e-mailed receipts.

"We're able to look at competitive pricing and what impact it has on sales," said Jaimee Minney, VP-marketing and public relations for Slice. "CPG has been a very hot area" for Slice, she said.

In November, InfoScout, a Silicon Valley startup that counts Procter & Gamble Co., Unilever and Nestlé among clients and Tesco-owned Dunnhumby as an investor, added e-commerce and other "omnichannel" tracking capabilities. It's tracking e-commerce receipts from more than 100,000 of the 175,000 households that already use its apps to scan receipts from offline sales.

The data allows CPGs to see "individual households shift from brick-and-mortar to online, including which categories, how it starts, what the snowball effect is leading into other categories and how it changes frequency of purchase and loyalty to brands," said InfoScout CEO Jared Schrieber.

InfoScout also does flash surveys of its panel and measures brand and category sales offline -- everywhere from conventional supercenters to bodegas and other traditionally untracked small stores, he said. Ultimately, he believes panels of smartphone-equipped consumers will keep eroding the power retailers have over sales data.

Not even panels of millions can match the precision of data directly from retailers, said IRI Chief Information Officer Ash Patel. But they could more easily replace conventional consumer panels, since it's easier for consumers to scan their receipts than scan each item they buy, as is the case with traditional panel measurement.

Mr. Patel hopes big e-commerce players such as Amazon and Walmart.com will eventually provide data to syndicators as offline retailers do. Inching in that direction, Amazon recently began offering suppliers category sales data beyond their own brand sales if they spend $5 million to $10 million a year advertising, Mr. Patel said. Amazon declined to comment.