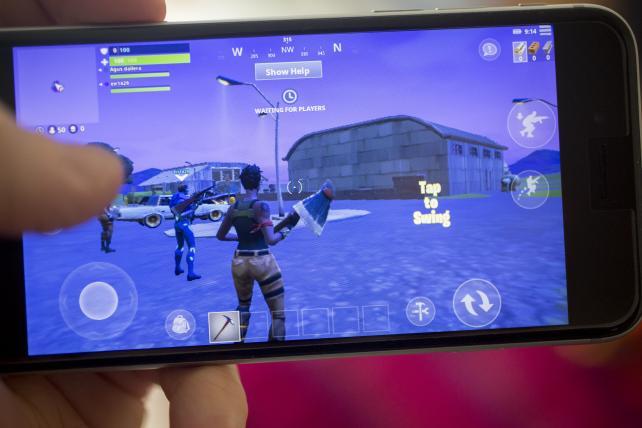 'Fortnite: Battle Royale,' the hit game that's denting the stock prices of video-game makers after signing up 45 million players, didn't really take off until it became free and a free-for-all.
Credit: Andrew Harrer/Bloomberg

E3, the video-game industry's big trade show, is where companies typically showcase their newest titles, but it's the year-old free global hit Fortnite that's likely to be the talk of the convention in Los Angeles next week.

The multiplayer shooting title released last year by closely held Epic Games has become a cultural phenomenon. It's attracted 45 million players worldwide and is generating hundreds of millions of dollars a month in sales from fans buying virtual avatars and accessories. That's as much as paid hits like Call of Duty from industry leader Activision Blizzard.

Already some game-makers are adapting to Fortnite's battle-royale style of play. Activision, for example, will use E3 to show off its latest Call of Duty, due to be released in October, with an every-man-for-himself mode. Online game sites speculate that Electronic Arts will unveil a battle-royale version of its upcoming Battlefield V and that Nintendo Co. will make Fortnite available on its popular Switch gaming device. That would be a big change for the kid-friendly company whose combat-oriented title Splatoon mimics paintball.

"It will be a battle royale for battle-royale games," says Matthew Kanterman, an analyst at Bloomberg Intelligence.

The established players will have some catching up to do awareness-wise. The Cleveland Indians recently showed a Fortnite match on their giant stadium screen during a rain delay. Fans can watch NBA players battle it out on Amazon.com Inc.'s Twitch service. Tyler Blevins, a 27-year-old professional gamer who goes by the name Ninja, has become a global celebrity thanks to Fortnite, which pits up to 100 contestants in a fight to the finish on an island.

Officials at Electronic Arts and Nintendo declined to talk about their plans in advance of scheduled presentations. Electronic Arts, based in Redwood City, California, will showcase its newest products Saturday morning in Hollywood, while Kyoto, Japan-based Nintendo will stream its press conference in the morning on June 12.

E3, a three-day event, officially opens Tuesday. More than 3,500 products are expected to be on display, a 41 percent increase from last year, according to the Entertainment Software Association, which runs the show. New exhibitors this year include bobble-head maker Funko Inc., retailer GameStop Corp. and Facebook Inc.

Fortnite's success is perhaps most challenging for the video-game industry because it's free to play. After first releasing a paid version last July, Epic came out with a free battle-royale version in September. The company makes money charging contestants for accessories, such as outfits and hang-gliders, which don't influence the game but make the players look cool.

Epic, based in Cary, North Carolina, will have its own presence at the show. The company is staging a Fortnite Pro Am at a local soccer arena on June 12, and its worldwide creative director, Donald Mustard, will speak on a panel the following day.

In an online survey in advance of E3, Piper Jaffray analyst Michael Olson asked gamers what title they were most interested in playing over the next year. Fortnite won.