Company Will Take a Cut of Offers Redeemed
READ THIS NEXT
Watch: How Discord's CMO is wooing more than gamers

Looking to unlock a new revenue stream, Foursquare is announcing new partnerships with Visa and MasterCard that will let credit and debit card holders claim discounts at participating retailers. 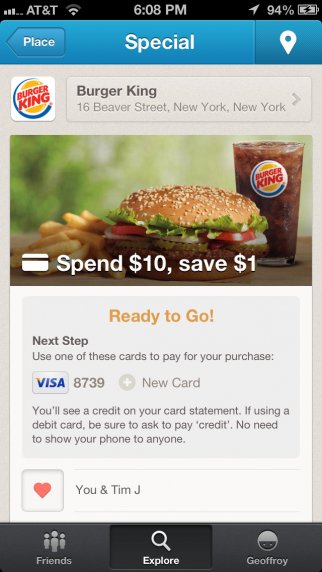 The deal is essentially replicating what the company has had in place for going on two years with American Express, a program that enables people to "sync" their credit cards with Foursquare to claim discounts that appear as credits on their statements simply by checking in to a participating location.

Merchant participants have included Whole Foods, Nike, Sports Authority and Dunkin' Donuts. (American Express subsequently expanded the concept of syncing to both Facebook and Twitter, and card holders can now make purchases of items like an Amazon Kindle HD by tweeting a hashtag.)

While the American Express program was essentially a marketing partnership at its inception and didn't generate any revenue for Foursquare, the terms have changed over time to become more lucrative, according to the company's product manager, Noah Weiss. Foursquare will now earn a fee from offers redeemed on the platform from all three credit card companies, though Mr. Weiss declined to say whether it would be a flat fee or a percentage of the purchase.

"This is going to be a pretty core part of our revenue model going forward," he said.

The first deal debuting today for all three credit cards is being offered at 8,000 U.S. Burger King locations: a $1 discount to those who check in and spend at least $10.

In an effort to urge users to redeem more of these offers, Foursquare will also be making them more prominent within the app. Users will now be able to see in their profiles which cards they've synced to their account and all the savings they've had over time. And offers from a credit card company will be differentiated with their own symbol from other "specials" put out by nearby merchants.

Foursquare's assertion of a promising new revenue stream comes at a time when enthusiasm for the four-year-old startup among marketers and investors alike appears to be waning as user growth slows and its ad product -- promoted "updates" from merchants -- sees slow adoption. The Wall Street Journal reported in November that the company was looking to raise another $50 million and was having a tough time winning over investors.

Foursquare is working with the payments-processing company First Data and CardSpring, a platform that lets developers build apps for payment cards and terminals, to enable the transactions with Visa and MasterCard.