NEW YORK (AdAge.com) -- Web sites clicked; miles run; TV watched; text messages sent. The data stream left behind by humanity is truly mind-boggling and threatens to overwhelm. But a new generation of creatives is looking to harness it -- to make it useful and even beautiful.

Data, and its ubiquitous nature in the digital age, was one of the stronger undercurrents at the CaT: Creativity and Technology conference last week in New York, whether it was a tiny stream of SMS info, the GPS location of a shark in Area/Code's "SharkRunners" game or something as colossal as a map of an electron, brought to life by JoAnn Kuchera-Morin in her 30-foot-tall Allosphere at the University of California Santa Barbara. 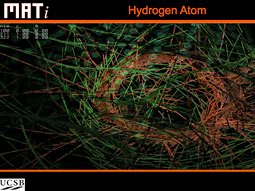 "People and things are producing data at this incredible rate," said Area/Code co-founder Kevin Slavin. "Anything you can think of probably exists in data format; you just have to make the calls to find it."

Gartner Group predicts that by 2012, physical sensors recording data and sending it into the ether will account for 20% of all non-video internet traffic. President Obama's Open Government Initiative promises to democratize the troves of data collected and held by the federal government. That's a lot of data. "How are we going to mine the voluminous amount of data for the creative process?" asked Ms. Kuchera-Morin.

It's not just a passive trail. Consumers are proffering their data on Facebook and MySpace, including really personal information on sites like RealAge and Bedposted. "People are giving up a lot of data ... and brands are finding ways to make use of that," said Benjamin Palmer, CEO of The Barbarian Group.

Apps that take available data and make it useful are supplanting a generation of humorous but less useful mobile applications. For example: Clif Bar wanted to do an app that ranked ski resorts, but at least four were already in the iTunes app store. Creative firm Small Society added another layer of interest to Clif Bar consumers: the ability to sort ski hills by recent environmental records.

And visual representations of data have an impact that transcends mere organized facts.

Aaron Koblin of the Google Creative Lab, for example, showed what it looks like when you take flight data, speed it up and color code it by type of airliner. He also showed what it would look like if you could see all the text messages emanating from Amsterdam on New Year's Eve.