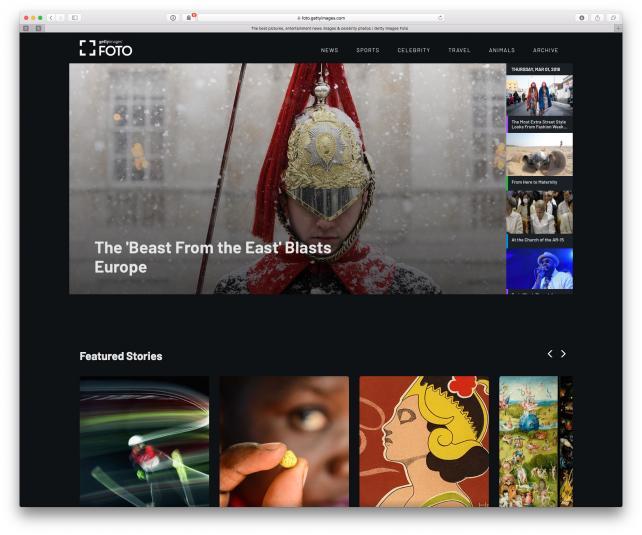 If you know Getty Images, you're probably either a photo editor or someone who just happened to stumble on the site while perusing photos from a big event like the Olympics.

Getty wants to change that.

The 23-year-old company plans to step beyond its b-to-b roots with a new consumer-facing website called Foto, officially launching this week, where its massive wealth of images will be curated for a wider audience to explore and enjoy.

"We have 18,000 images coming into our system every day from hundreds of thousands of photographers and contributors," says Bill Shapiro, editor-in-chief at Foto and a former editor-in-chief of Life magazine. "If anything is happening out there, we've got a picture of it. ... So we're able to see what's going on in the world right now, and sort of look back and put things in context."

The site will include photo essays, such as "The Most Extra Street Style Looks From Fashion Week 2018" and "20 Moments to Remember From the 2018 Winter Olympics." The content spans news, sports, celebrity, travel, animals and more.

Andy Blau, Getty's senior VP of consumer media, says Getty's search-and-find site for photo buyers and editors was getting 17 million unique visitors a month, but that sales weren't reflecting it—leading the company to realize consumers were looking at the pictures.

And Getty's Embed site, which lets anyone license images for noncommercial use for free, was getting another 20 million viewers a month.

"That's a huge number of people without anyone really trying to attract those people," says Blau. That sparked the idea to take that organic traffic and form a revenue-based business.

Foto, which plans to enter the market in the second quarter with ad sales, will be a mobile-first site. "As the world is going more and more toward postliterate, with emojis and using pictures and everything else to communicate," says Shapiro, "we wanted to ... embrace that."

For now, the company is focused on making Foto, which so far has a 10-person team of writers, editors and social media staffers, an "ultra-premium site," says Blau, one that offers an elegant experience for users as well as a brand-safe environment for advertisers.

Getty will refer traffic to Foto from its other sites.

Next up: a monetization strategy. One way is by weaving in a brand presence "seamlessly" using ad units or native content for something like a red carpet premiere, which would populate photos in almost real time, says Getty Global VP of Consumer Media Kavata Mbondo.

Though the company will cover breaking news, Mbondo says it intends to be careful about brand safety.

"Sometimes, breaking news is graphic, it's extremely sensitive," she says. "In those areas, monetization is not the most important thing. We will likely not run advertising on those pages."

But as for other parts of the site, "we can create stories that are super, super brand-safe."

The site could also help editors speed up image selection for stories, Mbondo says. They have hundreds of millions of images to sift through when selecting photos, she notes, but they could (eventually) turn to AI to help find images that work.

Marc USA Executive VP and Executive Media Director Dave Buklarewicz says Foto could be an excellent way for brands to get in on big opportunities like the Academy Awards even if they're not spending the big bucks to advertise on the show.

"It opens another avenue," he says. "You can you sort of hijack that sponsorship in some way, shape or form."

Breaking out the site as its own brand was a smart move to keep consumers happy, says Greg Manago, co-president of Content+ at Mindshare North America.

"Some publishing platforms can get into trouble when they're bringing this [kind of] experience [into] the mainline platform," he says. "That can be a problem for the audience specifically if they feel like they're suddenly getting served advertising in a place there never had been."

The Getty archive could also be a way for visitors to fall into a rabbit hole of beautiful or interesting old images that they'll want to share.