Global Mobile Ad Spending Will Climb to $100 Billion in 2016

The mobile ad spending pie is set to reach $100 billion next year, according to a report by eMarketer. 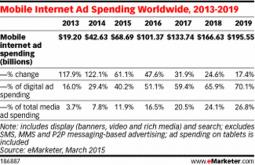 This figure is more than a 400% increase from 2013, and it will likely double to nearly $200 billion between 2016 and 2019, accounting for more than a quarter of all media ad spending worldwide. 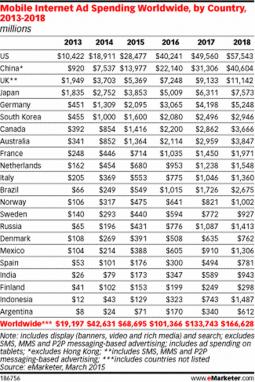 Through 2018, the current top five countries will remain the same, but there are some up-and-comers, including Canada and Australia, both of which will pass South Korea in mobile ad spending. Also, Brazil is slated to become the ninth-largest mobile ad spender with $2.7 billion.

The upswing in mobile spending correlates with more mobile device users, as well as users spending more time with their devices.

The number of tablet users is nothing to sneeze at, either, with a projected number of 1 billion in 2015, a number that is growing slowly but steadily.