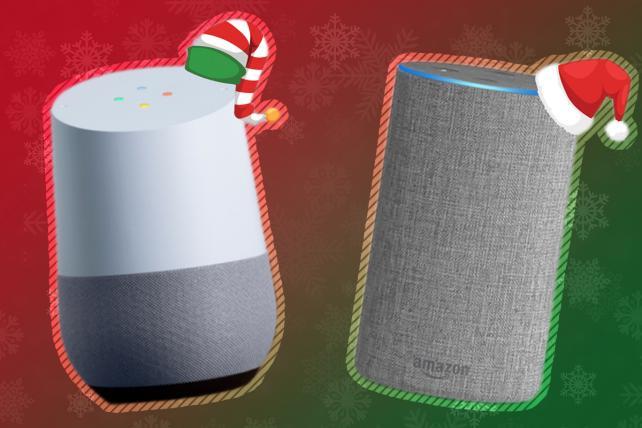 Tech companies offering so-called virtual assistants battled it out over the holiday season, a move that underscores the high-stakes race in becoming the market leader with connected devices.

From pricey TV commercials during NFL games to digital ads on websites, Google and Amazon have been locked in a major holiday push, collectively spending over $70 million advertising their devices since Thanksgiving.

Beyond the ads, each also cut prices for their miniature smart speakers by 40 percent, shaving $20 off the price this holiday season.

The move seems to have paid off for Amazon, which on Monday said it sold "tens of millions" of Alexa-enabled devices over the holiday season, outselling every other product offered on its platform.

"Amazon, Google and Apple all know something different about you and they are going to try and win in different ways," says Frank Gillett, Vp and principal analyst at Forrester. "Which one wins remains unclear, but if you wanted to declare a winner today, it is Amazon."

But which device sold most over the holidays is only part of a larger equation. "This race isn't about getting consumers to buy a gadget," says Gillett, but to lead them to ultimately choose Google, Apple or Amazon as their interface with a coming world of connected devices and cars. Selling the most units over the holiday is only one victory in a longer war over whether Google, Siri or Alexa will become the "agent of choice" that delivers the most usable, useful extension to people's lives.

Google did not respond to request for comment on how well Home sold, and several analysts said it's too early to estimate sales figures for the holiday period. However, according to App Annie, Amazon Alexa was the No. 1 most downloaded app on Christmas and the following day. Google Home was No. 6.

From the week of Thanksgiving through Dec. 26, Google spent some $42 million on TV commercials for its Home smart speaker, according to iSpot.tv. Amazon spent about $32 million during the same time period. The bulk of the commercials also ran during NFL games, iSpot.tv finds.

"Which is better, or which provides the most value is messy to evaluate," Gillett says. "Ultimately, this about Google and Amazon getting people to use their digital assistants."