Google has announced its long-awaited move to personalize search results with content from Google+, signifying its readiness to put the muscle of its core product behind its social-networking play. While Google+ recently hit 62 million users, according to one estimate, real engagement has been sluggish. But baking social signals into search could be Google's trump card in spurring brands concerned about their search visibility to carve out a greater presence. 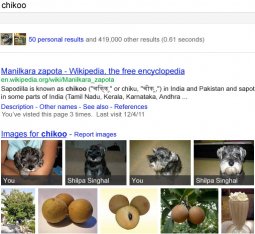 A searcher can now pull up stuff from Google+ connections.
With Facebook clearly in its sights, Google has been rolling out "social search" results since October 2009, personalized for signed-in users based on personal connections identified within the Google ecosystem. The latest deployment, which pulls up Google+ content and is called "Search plus Your World," will be rolled out over the next few weeks, but the degree of change in users' search experience will depend on how avidly they use Google+.

A Google blog post illustrating the changes noted that a post describing a travel destination by someone in a user's Google+ "Circle" can now show up in a search. A search for "Ben Smith" could pull up the Google+ profile for one the user knows personally rather than information about the new editor-in-chief of BuzzFeed. And a module on the right side of the screen can pull in Google+ profiles for broader subject searches. For example, a search of "music" would retrieve Google+ profiles of Britney Spears and Alicia Keys or other "prominent people who frequently discuss the topic" on Google+. (That particular product could be the precursor to an ad unit in the vein of Facebook's "sponsored stories," baking in the endorsement from a user's connections.)

Though it may take time for the majority of Google+ users who are relatively inactive on the platform to even notice the changes to search, there's a clear imperative for brands to react, since those with compelling content on the platform can be rewarded. Google may in fact be counting on marketers that have for years been encouraging customers to find them on Facebook to now lure them to Google+ in the hopes of a search boost.

"If they can get advertisers to do the same thing -- to say, 'Go engage with my brand via Google+' -- it's a brilliant scenario because Google can rely on the marketers as sellers in promoting the platform," said Kevin Lee, CEO of Didit.

"Search plus Your World" will become the default setting for signed-in Google users, though they do have the ability to opt out. Even so, Google runs the risk of alienating the subset of power users on Google+ whose search experience will be most affected, since the new product doesn't include streams from Facebook, Twitter or Flickr and thus doesn't accurately represent their social worlds. (Google used to have access to a firehose of Twitter data to power real-time search results, but let the subscription lapse in July.)

"I think this is one of those rare times when the Google premise has the distinct possibility of not being a satisfying outcome for a consumer because it's not the full social graph," said Chris Copeland, CEO of GroupM Search. "It's the Google graph."