READ THIS NEXT
The TikTok difference: Joining a genuine conversation vs. interrupting one
AMP Stories. Credit: Google

Google has launched AMP Stories, a feature that lets publishers create content similiar to Instagram Stories, but for mobile websites.

AMP, short for Accelerated Mobile Page, loads content extremely fast. The open-source project was led by Google roughly two years ago, after users began spending more time in apps than on websites. (The latter is where Google makes most of its money.) Partners in AMP Stories include The Washington Post, CNN, Mic, Conde Nast, Wired, People and Mashable.

Ads are not yet available on the new format, but plans for them are in the works, says a spokesperson for Google, adding that additional details regarding advertising in AMP Stories should arrive in the coming weeks. 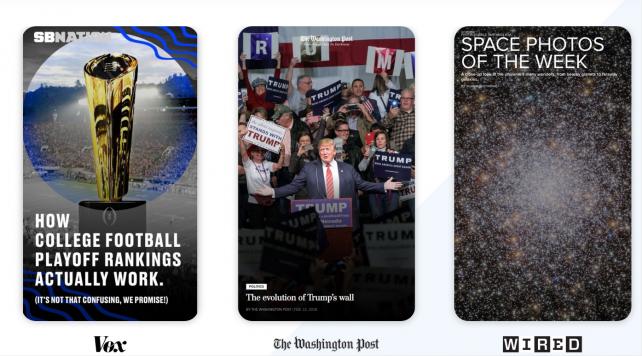 Because Google rewards the best real estate in its search results to websites that load quickly, expect to see more publishers adopt AMP Stories in the near future. In March of last year, Google said there were more than 2 billion AMP pages on some 900,000 domains.

Malte Ubl, engineering lead at the Google AMP Project, said in a blog post that AMP Stories can be easily shared or linked because because they live on the web and are hosted on the publisher's site. "While some stories are told best through text, the AMP Project wanted to ensure publishers can invest in new ways of storytelling and engaging readers on the open web," he wrote.