But Will Moves Backfire as 'Publicity Stunt'?
READ THIS NEXT
Square to buy Jay-Z's Tidal music service and appoint him to the board

Led by Google, internet companies are using their online clout to stoke opposition to Hollywood-backed anti-piracy measures in Congress that they say will encourage censorship and chill innovation.

Google, owner of the world's most popular search engine, placed a link on its home page today opposing the House and Senate bills, joining protests by Wikipedia and other websites. Google had about 400 million U.S. searches daily in December, according to web-measurement firm ComScore, dwarfing the 111 million viewers of last year's Super Bowl game.

Public criticism spearheaded by Google, Facebook and Twitter slowed an initial "smooth glide to passage" for the anti-piracy measures, which the entertainment industry supports, according to Rogan Kersh, an associate dean at New York University's Wagner School who conducts research on lobbying.

"Google and Facebook and Twitter are part of our daily lives in a way that most of us find very appealing," Mr. Kersh said in an interview. "These are sexy brands. If you're a member of Congress, you don't want to be on the wrong side of the social media and new media darlings of America."

Google typically devotes its home page to displaying its services, not taking stands on legislation, and its icon is often used to commemorate historical events and individuals. Wikipedia, the encyclopedia where users contribute entries, is closing the English version of its website for 24 hours to protest the measures. 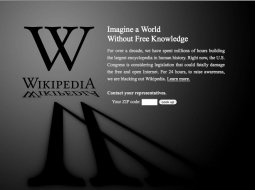 Microsoft, the world's largest software maker, said in a statement yesterday that it opposes the House measure as currently drafted. The company said it doesn't plan to shut down its online services in protest.

The Stop Online Piracy Act in the House and the Protect IP Act in the Senate are backed by the movie and music industries as a way to crack down on the sale of counterfeit goods by non-U.S. websites. Hollywood studios want lawmakers to ensure that internet companies such as Google share responsibility for curbing the distribution of pirated material.

The so-called blackout day is "abuse of power, given the freedoms these companies enjoy in the marketplace today," Christopher Dodd, chairman of the Motion Picture Association of America, said in an e-mailed statement yesterday.

"It's a dangerous and troubling development when the platforms that serve as gateways to information intentionally skew the facts to incite their users in order to further their corporate interests," said Mr. Dodd, a Connecticut Democrat who served three decades in the Senate.

News Corp.Chairman Rupert Murdoch called Google a "piracy leader" in a Jan. 14 post on Twitter, saying that it streams movies for free and sells advertisements around them. A day later he wrote in his Twitter account that Google is a "great company doing many exciting things. Only one complaint, and it's important." Miranda Higham, a News Corp. spokeswoman, declined to comment.

Samantha Smith, a Google spokeswoman, said the company respects copyright. "Last year we took down 5 million infringing Web pages from our search results," she said in an e-mail yesterday.

Mr. Murdoch represents a "radioactive" brand, and his comments are "terrible timing" for supporters of the legislation, Mr. Kersh said. "As supervisor of a media empire that is best known at present for hacking into people's personal phone accounts, this is not someone you want arguing for more government involvement in the lives of the public."

The Senate is scheduled to hold a procedural vote on Jan. 24 to determine if there's enough support to begin debate on its version of the bill. Rep. Lamar Smith, who heads the House Judiciary Committee, said he expects the panel -- which began debating the House bill in December -- to resume consideration in February. Committee members have offered about 60 amendments.

Mr. Smith called the protest by Wikipedia and others a "publicity stunt" that "does a disservice to its users by promoting fear instead of facts," according to an e-mailed statement yesterday.

The administration cast some doubt over the legislation's prospects on Jan. 14, saying in a blog post that it wouldn't support measures that encourage censorship, undermine cybersecurity or disrupt the structure of the internet. The post, signed by three White House technology officials, marked the administration's most significant foray into the fight between content creators and web companies.

President Barack Obama, who draws support from both Hollywood and the internet industry, is trying to "steer a line" between the competing interests, Mr. Kersh said.

Mr. Obama has received $1.34 million in campaign donations from employees of the computer and web industries since January 2011, according to the Center for Responsive Politics, a Washington-based group that tracks political giving. He received $1.02 million from workers in the TV, movie and music industries during the same period.

On Jan. 13, Mr. Smith said that he would remove a provision from his bill that would require internet-service providers when ordered by a court to block access to non-U.S. websites offering pirated content.

Sen. Patrick Leahy, a Vermont Democrat who leads the Senate Judiciary Committee, said Jan. 12 that he's willing to consider dropping a similar provision from the bill he sponsored. Opponents say such blocking may harm the stability of the internet's domain-name system.