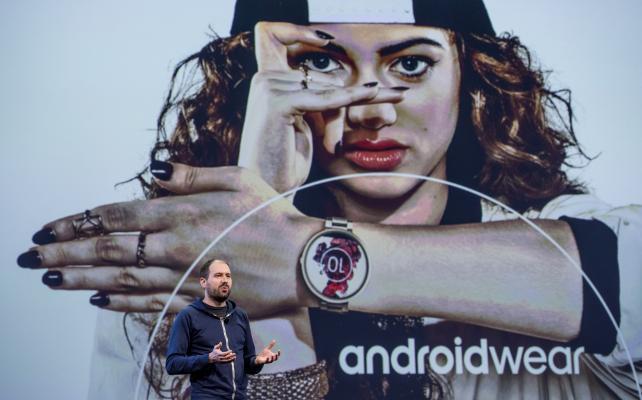 David Singleton, director of Android Wear for Google, during the Google I/O developers conference in May.
Credit: David Paul Morris/Bloomberg

The software that powers the Google-friendly smartwatches will integrate with Apple's iPhones through a new service, according to Jeff Chang, lead product manager for Android Wear.

The new option enables an iPhone to pair with a smartwatch from LG Electronics, along with those planned from Asustek Computer and Huawei Technologies Co.

"There's a lot of different tastes out there," Mr. Chang said. "Between round and square, sporty and traditional and classic and all that -- I really think that there's a wide variety of preferences there. And so we're giving that choice to everyone."

Google is looking for new ways to make its Android Wear software more popular as it tries to woo customers from Apple, which released its watch earlier this year. In the second quarter, Apple sold 3.6 million of the devices, or about two-thirds of smart wearables, while Android Wear took about 10%, according to Ramon Llamas, research manager for IDC's wearables team.

"It's a shrewd move," he said. It's market that's "really in its nascent stages right now."

Popular features
The new service for smartwatches with iPhones aims to use some of the most popular features from Android, including providing alerts for e-mails, calendar items and fitness updates. Also, with "GoogleNow," users can get tips on the status of a flight or weather forecasts.

Yet it won't have some of the features available on other Android devices -- including Google's maps, third-party apps through the Google Play store and Wi-Fi connectivity. Mr. Chang said longer term the company will look at what users prefer on iOS and Android devices -- and prioritize features accordingly while abiding by Apple's restrictions.