Top toy lists are typically the purview of major retailers like Toys 'R' Us, Walmart and Target , but this year, Google unveiled its own list of hot toys. It's no ordinary list. Consumers are able to view the toys in 3-D, using a cursor to turn an item in circles and view it from all angles. There are also listings of online stores and nearby stores, as well as reviews.

It's just one example of how Google is marshaling its resources in an effort to become shoppers' information destination. Sameer Samat, VP-Google shopping, says the company's efforts are in response to changes in consumer behavior and the merging of the online and offline worlds, particularly when it comes to shopping habits. Seventeen percent of shoppers will visit a store, then buy online, while 51% who buy in store, researched first online, he says.

"That exemplifies where we want to go from a company standpoint," Mr. Samat said. "We want to make the customer's life easier, save them time and turn intentions into actions as quickly as possible. That's the backdrop for us."

Google has launched a host of tools in time for the all-important holiday shopping period. There are indoor maps for popular malls and select retailers; current deals and promotions have been added to product listings; and a tool called Shortlists was recently unveiled. Shortlists -- a sort of Pinterest-meets-Amazon Wish List hybrid -- can be used for researching products and discussing purchases with friends or family.

"Any time you can increase the connective tissue and get consumers to spend more time with your brand -- I don't care if it's a search engine -- it's a good thing," said Kevin Ryan, CEO of Motivity Marketing, a strategic consulting and project-management firm.

Mr. Ryan also pointed out that the world of shopping can be fragmented, with a variety of apps and tools available. By consolidating all of the tools a shopper might want to use in one place, Google is cultivating loyalty and, ultimately, increasing activity into its paid product listing ads. That's significant given the company completed the transition to a new Google Shopping product, which requires retailers to pay for inclusion. 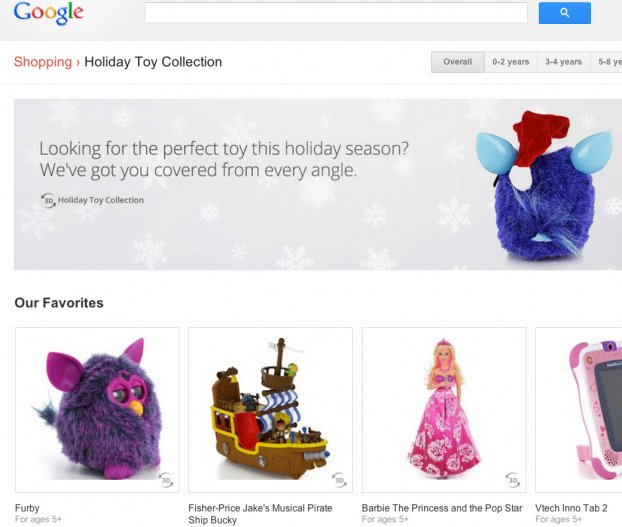 "We believe Google is squeezing more juice out of that lemon, taking someone who put in a product-related search and getting more clicks than they ever got before out of those searches," said Kevin Lee, CEO at search-marketing firm Didit. "They're trying to keep consumers engaged and excited. Even if [these new shopping tools] don't make more money right away, they have to make sure they retain their lead in the eyes of consumers."

Mr. Samat says Google is taking the long view. He says consumer feedback and engagement, as well as traffic metrics will help determine whether it's worthwhile to promote things like a hot toys list.

"A lot of these tools don't necessarily drive those kinds of clicks to retailers. We take a much longer view on things," Mr. Samat said. "If we're helping consumers be more effective in shopping and more activities, they will find Google more relevant and valuable as a company. That's a good thing for Google, long term."

Still, its efforts aren't without detractors. Microsoft's Bing has launched a campaign dubbed, "Don't Get Scroogled." The campaign aims to educate consumers on Google's new pay-to-play shopping model. "Google shopping is nothing more than a list of targeted ads that unsuspecting customers assume are search results," Bing states. "We say that when you limit choices and rank them by payment, consumers get Scroogled. For an honest search result, try Bing."

The campaign doesn't appear to be getting too much traction among consumers, however. Days after posting the campaign on Facebook, it had only received 86 Likes and 44 Comments. And industry watchers dismiss the effort as propaganda.

"There are a whole lot of areas in Bing that are poorly labeled, including the shopping area," said Mr. Lee. "They're positioning themselves as pristine, when they're not."