Google Steps Up Rivalries With Apple, Facebook at Developer Event 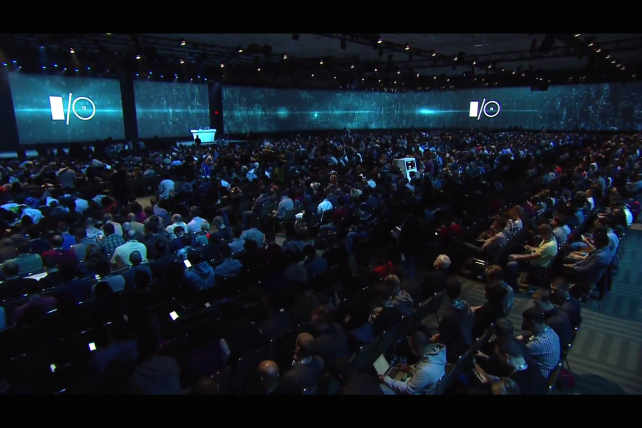 Google has two main rivals -- Apple and Facebook -- and on Thursday the search giant unveiled new ways it's competing with both companies.

At its annual developer event in San Francisco, Google announced a new mobile payment service, an operating system for internet-connected devices and an update to its personal assistant app that will help it compete with Apple's similar products. And it showed off new products that can counter Facebook's app-install ad business and Oculus VR virtual reality headset.

Google rolled out a way to pay for things purchased from a brick-and-mortar store using a smartphone before Apple ever did. But Google Wallet never really took off. So now -- after Apple rolled out Apple Pay last year -- Google is rolling out a new mobile payments service called Android Pay that works about the same way Apple's similarly named product does.

After uploading a credit- or debit-card information, people can use their Android phone to pay by holding up the phone to a store's credit-card reader that has the technology to read information from a nearby device; they can even use their fingerprints to verify a purchase like they would with Apple Pay and use Android Pay to make in-app purchases. Also like Apple Pay, Android Pay doesn't share a person's actual debit- or credit-card number with the retailer but insteads sends a unique transaction-specific code. Retailers including Best Buy, Walgreens, McDonald's, Whole Foods and Macy's have signed on to enable Android Pay for purchases made in their stores.

Operating System for the Internet of Things

More "dumb" devices like TVs, washing machines and door locks are becoming connected to the internet. That should make them as "smart" as a smartphone or computer, but only if they can use the internet to connect with other devices. That's why Google bought connected-device maker Nest Labs in January 2014. Now Google is building a way to connect all these different devices, so that when someone is getting ready to make dinner using a recipe app on her phone, the app can set that person's internet-connected oven to the proper temperature.

Many early reviews of Apple's month-old smart watch wondered about the best ways to use the even-smaller screen. Google thinks it has some answers. Google wants there to be more "truly useful wearable apps," said David Singleton, director of Google's Android Wear program that gives developers a way to build apps for smart watches and other internet-connected devices that are designed to be worn on a person's body. To that end, Google is making it easier for people to quickly get information from their smart watches. It's adding always-on screens so that if you pull up a map on your watch, the map doesn't go away when you drop your arm. It's also going to let people scroll through notification lists by literally flicking their wrists in the direction they want to scroll.

Google's Now service acts like a personal assistant, doing things like monitoring traffic and a person's calendar to notify that person when she needs to leave to make her flight on time. Apple reportedly has similar ambitions for its Siri service and plans to announce them at its developer conference next month.

But "your smartphone still ought to be smarter," said Google Now's director Aparna Chennapragada. For example, when someone texts you about going to dinner at a given restaurant, right now you have to copy the restaurant's name and open up other apps to see reviews and make a reservation. So Google has built Now on Tap. Now on Tap can recognize the restaurant's name in the text message and, after tap-and-holding the phone's home button, will bring up information about the restaurant that would appear in a Google search result as well as links to apps like Yelp and OpenTable to see reviews and make the reservation.

Facebook has built a multibillion-dollar mobile ad business, thanks in no small part to app developers buying ads to promote their apps. Google has been trying to get in on the action, and on Thursday the company made it easier for app developers to run ads promoting their apps across Google's properties as well as others' sites and apps in which Google sells ads. Instead of setting up individual ads for each environment, app developers can use Universal App Campaigns to create one ad that can be syndicated across Google's search pages, YouTube, the Play app store and its networks of third-party sites and apps.

As seemingly everyone who has tried out Facebook's Oculus Rift virtual reality headset attests, virtual reality is the next frontier of video viewing. That has big implications for Google, which owns the dominant online video service YouTube. So Google has created a new camera system that anyone could use to shoot 360-degree videos that can then be formatted into virtual-reality videos. Camera maker GoPro has signed up to use that system to create a 360-degree camera setup.

But virtual-reality videos are only worthwhile if people can watch them, which is why YouTube will begin supporting the video format this summer. That means people will only need a phone with the YouTube app installed and Google's bottom-dollar spin on the virtual reality headset, Google Cardboard, to view these videos.