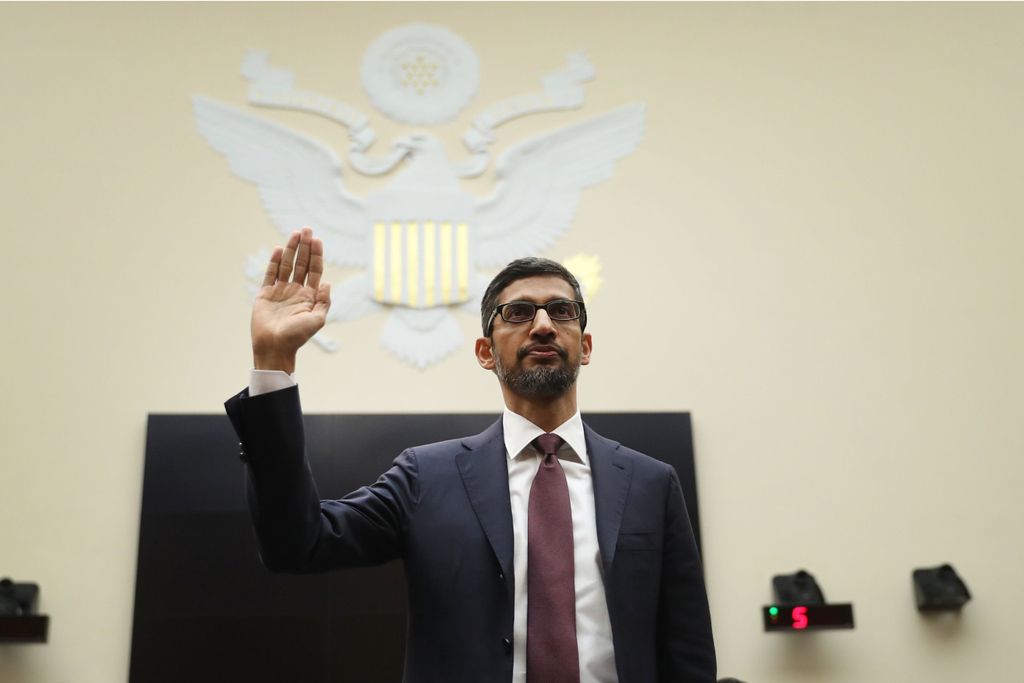 On Monday, The New York Times dove into a document from Google that reveals how the company might defend itself in the much-anticipated antitrust inquiry by the U.S. Department of Justice. The Times examined a 67-page document Google sent to Australian regulators in May and found an outline of the company's defense against charges it is a monopoly.

Google says it does not control all internet advertising. In its defense, "The company competes with a wide array of firms to run the market for ad space, including Amazon and lesser-known players like The Trade Desk," The Times reports. "(Only one other company listed on a chart produced by the Google advisers also owns products servicing every part of the ad buying process: AT&T.)"

Washington lawmakers and regulators are looking at Google, Facebook, Amazon and Apple, but Google's case seems to be progressing the fastest. CEOs of all four companies will appear before Congress at the end of July.

On Monday, Bloomberg News reported on Google's search dominance (no secret there.) Google has been cramming more ads into mobile search results, so paid results take up the best real estate on user's phones. It raises questions about how much it costs to achieve visibility on the No. 1 search engine.

If Facebook wants to end the boycott that was organized by civil rights groups, advertisers say it will have to clean up its most important property: News Feed.

“The News Feed—that is not a safe place at the moment,” Ellie Bamford, VP of media at R/GA, tells Ad Age. “The only way to be 100 percent guaranteed that you aren’t going to experience an issue being around misinformation, or hateful content, or racist content, or unsafe content, is by not advertising there."

Facebook promises fixes but, with 2.6 billion people on the social network, News Feed is not easy to monitor .

Will Johnson, CEO of The Harris Poll, writes in his column on Ad Age that Facebook is still the most popular social media brand, but that consumers have positive feelings about advertisers that boycott because of hate speech. Facebook, Johnson argues, has more to lose than money: its reputation.

Meanwhile, Jonathan Greenblatt, CEO of the Anti-Defamation League, restates his organization’s case against Facebook in a new piece in Ad Age that provides suggestions to fix the service.

On Monday, Mediaocean announced a deal to buy 4C Insights, a sign that the marketing tech ecosystem continues to consolidate. Mediaocean is paying an estimated $150 million for 4C, according to The Wall Street Journal.

Mediaocean is known for its TV advertising software and has hooks in connected TV. 4C, on the other hand, has connections in the digital ad ecosystem, including so-called walled gardens such as Facebook, Google, Amazon, Twitter and Pinterest.

Industry watchers say there is a need for marketing technology platforms that can oversee the whole landscape from connected TV to social media, and tie-ups like Mediaocean and 4C will try to fill that space.

In other deal-making, SiriusXM is set to pay $325 million for Stitcher, the internet audio platform. E.W. Scripps Co. is selling Stitcher, which it bought for $4.5 million in 2016, Variety reports.

SiriusXM will look to beef up its internet radio roster, which already includes Pandora.

A story in The New York Times looks at how yet another established media brand is confronting a checkered past when it comes to its treatment of Black employees. The Times said ESPN, which is owned by The Walt Disney Co., was holding multiple meetings with staff to address grievances expressed by Black colleagues.

"A key producer of some of ESPN’s signature shows said she watched others be promoted so often that she advised some fellow Black employees to leave the company to advance their careers," The Times writes.

Many established media companies are reflecting on their past practices in light of the racial justice movement. Ad Age keeps a running blog to highlight some of the progress being made, and today social media editor Ilyse Liffreing reports on a plan by CBS to devote 25 percent of its TV development budget to programs created by people of color.

Trump on Twitch: The Amazon-owned livestreaming player reinstated President Donald Trump's channel on Monday, The Verge reports. The president was punished for posting video of his speeches that Twitch said broke its rules. After a two-week ban, Trump is free to try again.

Toronto telethon: The storied Toronto-based agency Zulu Alpha Kilo held a 24-hour livestream charity event to raise money for the Advertising & Design Club of Canada. The event raised close to $75,000 and featured some of the most famous names in advertising, who rallied to support the 71-year-old organization, reports Ad Age's Lindsay Rittenhouse.

40 Under 40: Ad Age is taking submissions now to honor the industry's best and brightest young minds in 2020's 40 Under 40. The deadline is Aug. 5; details can be found here.

Podcast blast: A new report from the Interactive Advertising Bureau suggests that brands and media buyers are dedicating larger portions of their ad budgets to podcasts, Ad Age's George P. Slefo writes. Despite the global pandemic, the IAB reports, podcast ad revenue will near $1 billion in 2020.