As Groupon Dials Back Ad Spending, Growth Slows as Well
READ THIS NEXT
Twitch expands brand sponsorships on non-esports content

While online ad sellers cheer, this doesn't bode well for Groupon. The company must dial back its whopping half-billion in marketing spending to become profitable and, so far, those cuts have meant slowing growth in paying customers.

Groupon's $613 million in marketing expense for the first nine months of the year has largely gone toward bringing new subscribers to the platform, according to public filings. And it has: the company had nearly 143 million subscribers for its daily deals in September. All that spending has cut into profit and must come down to push the global giant out of the red for good. (Cuts so far have worked: Groupon is already profitable in North America and is almost there globally.)

But what's the real cost of spending less? It appears that as marketing spending decreased this year, so did the growth of paying customers. 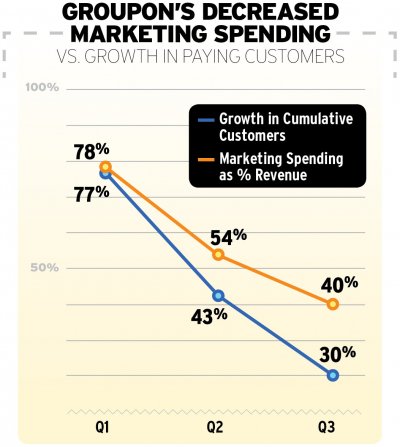 Note: Data from public filings and Groupon roadshow presentation. The company calls 'cumulative customers' the total number of unique customers that have purchased Groupon deals from January 1, 2009 through the specified date.

The number of subscribers that have ever bought a Groupon since the start of 2009--what the company calls "cumulative customers"--was about 9 million at the end of 2010. That number grew 77% to 16 million in the first-quarter. Then, as marketing spending slowed, paying customers grew 43% to 23 million in the second-quarter and 30% to 30 million total in September.

Groupon reports marketing cuts as "marketing spending as percent of revenue" in its roadshow presentation. That metric dropped from 78% in the first-quarter to 54% in the second-quarter to 40% by the September quarter, along the same trajectory as paying customer growth. (Of course, there are other factors such as growing competition from every direction and fatigue among subscribers bombarded by so many other companies now in the deals racket.)

Even with scaled-back marketing, Groupon spends on the scale of some pretty mega-marketers. So how much is $613 million in marketing money anyway?

Groupon's marketing budget for the first nine months is about two-thirds of the $964 million Visa spent on worldwide advertising, marketing and promotion for all of last year. It's just shy of the $629 million that Time Warner Cable, the nation's second-largest cable-system operator, disclosed it spent on marketing in the U.S. in all of 2010. Groupon's number is admittedly global, given it runs daily deal sites in 45 countries.

Groupon's nine-months marketing spending this year is one-third of the $1.96 billion Bank of America Corp. said it spent on worldwide marketing in all of 2010. (Benchmarks are fewer with stated "marketing spending" since most marketers report advertising expense in annual reports rather than the larger kitty for all marketing. For example, Apple reports spending $933 million on advertising in its 2011 fiscal year.)

For Groupon, marketing expense consists primarily of targeted online ads, including sponsored search, ads on social networks, email marketing campaigns, loyalty programs and affiliate programs, according to public filings. It spent $466.5 million in online marketing initiatives during the first nine-months for subscriber acquisition and expects to continue to spend "significant amounts to acquire additional subscribers." After marketing payroll costs, this year's remaining marketing money has gone to television, radio and print. Groupon spent just less than $16 million on TV, radio and outdoor ads during the first eight months of the year, according to Kantar Media.

The mega spending of Groupon, which is just three years old, is especially remarkable vis-a-vis internet giants such as Google and Facebook, who largely shunned consumer advertising in their early years. Approaching seven years, Facebook has just started to sell itself to advertisers and agencies ahead of its own, eventual IPO. Google didn't make consumer ad buys for almost a decade of existence. However, another deals site LivingSocial, for one, is also a big online ad spender.