Now Anyone Can Make a Dancing Hot Dog: Snapchat Opens Lens Studio to All | Ad Age
Skip to main content
Sign In Register

Now Anyone Can Make a Dancing Hot Dog: Snapchat Opens Lens Studio to All 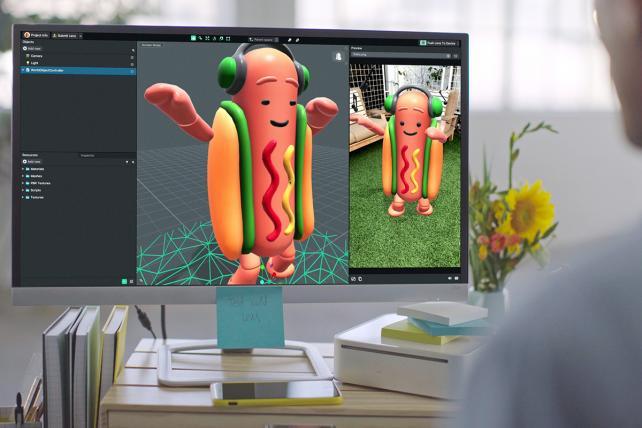 Snapchat is opening its augmented reality to the masses, opening a virtual studio where artists, developers and brands can create their own digital animations that users can put in their videos.

The Snapchat Lens Studio makes it easier for brands to participate in augmented reality on Snapchat, which many advertisers had complained was too cumbersome under the old process. Lenses are the augmented reality filters that go on top of images in Snapchat, transforming people's videos and selfies. Some of the more popular ones morph people into pixies and animals and add playful characters to the scenery, like Snapchat's now-famous dancing hot dog.

"With the release of Lens Studio, developers, creators, agencies, and brands will—for the first time—have the tools to create and distribute their own Snapchat augmented reality experiences," Snapchat said in a blog post on Thursday.

Consumers who build lenses can distribute them via links or "Snapcodes" that the app recognizes. Brands and advertisers can pay to distribute them at a cost per thousand impressions that ranges from $8 to $20, according to a Snapchat spokesman.

Snapchat helped pioneer and popularize augmented reality but the tech has since spread across mobile and digital platforms. Apple, Facebook and Google have all developed their own platforms for creating these augmented landscapes.

Snapchat's rivals raced for more open augmented reality tools, however, to hand to digital artists and ad agencies to work on their own. Snapchat's offering has been strictly controlled until now. Brands paid minimums of $300,000 to create lenses, a process that sometimes took up to two months.

The Lens Studio is meant to shrink that development time and eliminates the minimum ad spending requirement, according to people familiar with the situation. "Advertisers can develop a Lens in as little as a few days by working with a Lens Studio Partner or directly in the studio," Snapchat said.

The opening of lenses is expected to make it easier for brands experiment with them and buy sponsored lenses through Snapchat's automated ad platform.

Your face is the best real estate

Not every technological feature is immediately available, however. Anyone can create what are known as "world lenses," which can transform the landscape in videos. Only select agencies are allowed to build lenses that go on top of faces in selfies.

In true Snapchat fashion, Snapchat picked a few creative shops to have selfie lens privileges. Brands and bigger agencies seeking selfie lenses will have to go through them for now. The partners include Trigger Global, Media Monks and North Kingdom.

Snapchat has a heated augmented reality rivalry going with Facebook, which has opened a Camera Effects studio to offer similar technology to ad agencies and developers to create this digital experiences.

Just this week, Facebook took the studio out of beta, opening it more widely after controlling access to the tools.

Snapchat also released stats around lens usage, saying 70 million people play with them daily for an average of 3 minutes. Snapchat also said more than a trillion photos will be taken through its app in 2017.

~ ~ ~
CORRECTION: An earlier version of this article said Snapchat would begin letting advertisers target sponsored lenses at certain audiences in May 2018. That targeting has been available since May 2017.