Hulu Introduces $9.99 Subscriptions for Hulu Plus

NEW YORK (AdAge.com) -- After months of speculation and rumors of a much-needed new business model, the on-demand web video site Hulu announced a new subscription service Tuesday called Hulu Plus, which will allow users to unlock full seasons of premium shows on ABC, NBC and FOX across a variety of new platforms for a flat monthly fee of $9.99. Hulu Plus will still feature advertising, which means the company is adopting a model reminiscent of cable's -- collecting revenue from viewers and advertisers both. 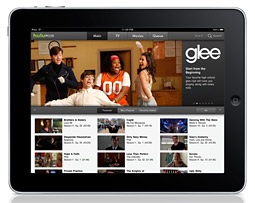 Glee on Hulu Plus. On an iPad.

With the new service, viewers will be able to view full current seasons of shows such as "30 Rock," "Modern Family" and "Glee." They'll also have access to full series of past shows like "Buffy the Vampire Slayer," "The X-Files" and "Arrested Development." This includes a growing library of 120 seasons of TV and 2,000 episodes, according to Hulu.

In a significant move toward adopting new platforms, Hulu is offering its new service in mobile formats on the iPhone, iPad and iPod Touch, as well as select Samsung internet-enabled TVs and Blu-Ray players. It will soon offer Hulu Plus service on PlayStation 3 and X-Box 360, as well as devices from Sony and Vuzio.

Hulu will continue to offer less comprehensive content free on Hulu.com, which continues to be available only on standard PCs and Macs.

For Hulu Plus' preview launch, which is currently by invite-only, the site has partnered with marketers Nissan and Bud Light to provide advertising across all its platforms. Hulu expects to include additional advertisers for the broader consumer launch of Hulu Plus, the company says.

Critics of the company have pointed out that Hulu's business model up till now has been deeply flawed, netting them an average of just pennies per viewer per hour. The company is partly owned by a joint venture between Fox, NBC and ABC, and the company's future may come under question when cable operator Comcast takes control of NBC Universal. Cable companies have expressed dismay that Hulu allows consumers to circumvent their content.

"Ultimately, as a content company, you have to be paid on multiple platforms for multiple eyeballs in multiple ways," Quincy Smith, partner in Code Advisors and adviser to CBS and Vevo, told Ad Age in March.

According to ComScore, Hulu is the second most-used video portal on the web, accounting for 3.2 percent of all online videos viewed, or roughly 978 million videos, in April. But Hulu still trails distantly behind YouTube, which accounted for 43.2 percent of videos viewed, or 30.3 billion videos, in the same period. Though Hulu's audience share has stagnated in recent months, the cross-platform approach is a clear attempt by the company to give its numbers a boost.

The market for U.S. online video advertising spending will grow 48% this year to $1.5 billion, according to eMarketer estimates -- much of that will be spent on long-form video content, which Hulu has cornered. Ad spending on online video is expected to reach 5.51 billion by 2014.

In a statement on Hulu's blog, CEO Jason Kilar addressed concerns that Hulu's partners, namely the show's creators, will see real revenues. "For our content partners, we offer revenues that compensate them fairly for bearing the cost of producing the shows we love," he wrote.