Consumers' dream of being able to skip commercials on TV became a reality with the advent of TiVo and DVR. It's about to become a bigger reality on the web.

The Interactive Advertising Bureau, which helps set uniform standards for online advertising, is adding a new format to the mix: video ads that you can skip.

In doing so, the IAB is offering support for publishers who believe consumers should be able to skip irrelevant ads shown at the beginning of a video. 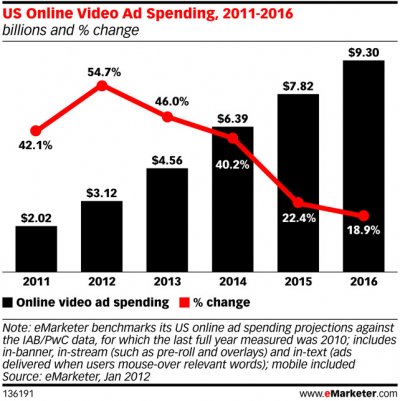 The introduction comes as publishers are investing more in longer-form, original web-video content in the hope of boosting advertising spending in the medium. To help that movement, the new guidelines support what the IAB refers to as ad "pods" -- in essence, a series of video ads that can appear within a single ad break, similar to a TV commercial break.

"The IAB doesn't create standards, but we step in and help create guidelines that are essentially reflective of what's going on in the market and, if broadly adopted, become standards," said Steve Sullivan, VP-ad technology at the IAB. "And that 's exactly what's happening here."

In late 2010, YouTube introduced its TrueView in-stream video ads, skippable commercials for which advertisers only get charged if the user watches for 30 seconds, or until completion if the video is shorter than that . For a video service as large as YouTube, data on who skips an ad is a valuable signal and informs which ad they show which person.

Also in 2010, Hulu introduced "Ad Selector," which lets viewers select from three ads, with the aim of identifying an ad that 's more relevant (or at least less annoying) to the consumer.

This year, ad-tech companies such as Solve Media and SpotXchange have jumped on the ad-skipping bandwagon, launching products that let consumers skip an ad if they type in a brand message or pay $0.10, respectively.

"When Google does something, everyone wants to standardize it because that 's the kind of power they have, so the IAB should act," said Jason Krebs, senior VP/chief media officer at video ad network Tremor Video. "But I think it's the exact opposite of where the industry should go. I don't think it's about skipping or not skipping, but about getting the ad right the first time."

Mr. Krebs said Tremor accomplishes this with its interactive video ads, for which marketers pay only if a viewer interacts with an ad.

The IAB also formally introduced a protocol that lets publishers identify how many and where ad breaks should appear in a piece of video content when the content appears offsite. Other technical advancements in this suite include support for HTML5, allowing a video ad to play across various devices and software platforms.

EMarketer expects the online-video-ad market, including mobile, to reach $3.12 billion in the U.S. this year, up more than 50% from 2011.

*This article has been clarified to note the IAB itself does not support skippable ads but its new ad formats do indeed offer technical support for such ads.