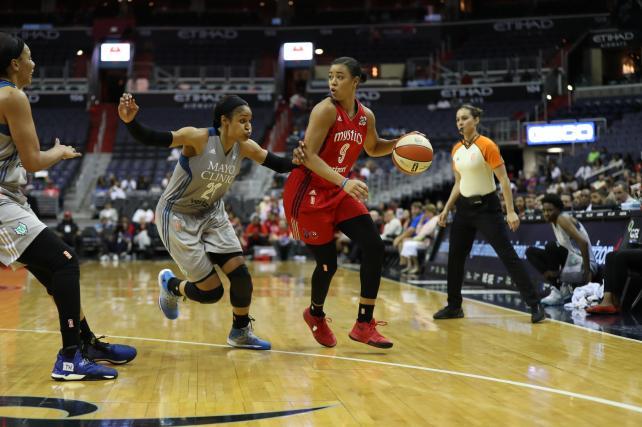 The WNBA is streaming 20 games on Twitter, one of a batch of smaller sports that are turning to streaming to reach fans.
Credit: Allen Kee / ESPN Images

When ESPN streamed the professional indoor lacrosse playoffs for pay-TV subscribers last year, about 4,000 people tuned in on average. This year, the National Lacrosse League averaged almost 344,000 viewers for each "Game of the Week" streamed on Twitter.

For football and baseball, which have billion-dollar national TV contracts, an online or over-the-top viewing option is a smart bet on the future and a way to please the most loyal fans. For professional lacrosse and other small sports, it's a must, even when the teams are owned by billionaires like the Buffalo Bandits' Terry Pegula or the Colorado Mammoths' Stan Kroenke.

"We're not on the big linear networks," NLL Commissioner Nick Sakiewicz said in an interview. "We may be someday when those networks may want our content and they want our audience, but for now, OTT is the absolute best way," he said, using the acronym for over-the-top viewing.

Until recently, small leagues had few options for national exposure. Unable to attract large audiences like football and basketball, they often received no rights fees or even paid to get their games on the air. Other times, they maybe had just their finals on live TV. Independent digital production companies, like Sportsrocket and NeuLion, have enabled smaller sports to economically reach more viewers.

While moves by minor sports to online streaming won't threaten traditional outlets like ESPN, the business models these leagues are establishing may be a window into the future of sports broadcasting. More consumers are shutting off their cable subscriptions in the internet era, and even ESPN --- one of the most-watched networks in the U.S. -- is crafting a streaming-video service that people could buy without having cable.

"There's a flexibility now to be able to offer up content directly to your audiences and get money in return for it," said Lee Berke, chief executive officer of the consulting firm LHB Sports, Entertainment & Media Inc. "Why not create your own network?"

The nine-team lacrosse league did that last year with NLL TV, according to Sakiewicz. The ad-supported, subscription OTT channel is offered online and on TV via streaming devices such as Roku and Apple TV.

"The smaller leagues, even though they had fans who were just as passionate and demanded great quality, didn't have the resources," said Brian Bedol, founder and CEO of New York-based Sportsrocket, which does online broadcasts for the NLL. He calls his OTT services the "media version of fracking," letting less-popular sports tap riches from smaller, hard-to-reach audiences.

By working with multiple clients, including the Arena Football League and DeerHunter.TV, Sportsrocket keeps costs down and offers leagues like the NLL high-quality streams at a fraction of what conventional TV would cost, Bedol said.

The NLL now has new revenue sources: ad sales from weekly Twitter games and its own NLL TV, along with more than 25,000 subscribers paying up to $34.95 a year. With NLL TV available around the clock, the league has more to offer to advertisers, which has increased sales and sponsorships, said Ashley Dabb, chief marketing officer.

Full-time cops
Unlike other professional leagues, NLL players work full-time as police officers, bankers, teachers and electricians, playing mostly on weekends. The average salary is about $20,000, according to Loffler.

The four-team National Women's Hockey League, which began in 2015, signed a broadcast deal with Twitter in June calling for 19 games to be aired in the 2017-18 season, including the all-star game and the NWHL/Team Russia Summit Series.

The league's goal is to eventually move the rest of its coverage off YouTube and onto a dedicated OTT service, according to Commissioner Dani Rylan. The 2017 All-Star Game on YouTube drew 6,300 views, according to statistics at the website.

Weather made going online a necessity for the World Surf League, which was re-branded from the Association of Surfing Professionals in 2015 and offered its first live stream in 2000. Surfing depends on the right conditions for waves, and traditional broadcasters can't change scheduling on the fly. Although the CBS Sports Network carries many big events and ABC airs some weekly highlights, all WSL live content is available free via streaming on the league's website or app, said Tim Greenberg, the league's head of digital and social media.

Working with NeuLion, a Plainview, New York-based production company that lists the NFL and NBA as clients, the surfing league developed an advertising-backed model that helps sponsors reach specific audiences. The league counts billionaire Dirk Ziff among its owners.

NeuLion can tailor ads for specific regions or markets during the live competition, stitching commercials directly into the stream and circumventing ad-blocking technology, according to Chris Wagner, the company's executive vice president. Sponsors like Corona and Jeep can target viewers in specific areas of the country during 30- and 60-second spots, Greenberg said.

NeuLion's interactive player, which lets viewers slow down the live stream or do a quick instant replay, means audiences stay with events longer, according to Wagner.