The advertising industry's anti-fraud group is making a change at the top just four months after its founding. 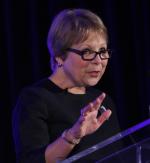 Linda Woolley, the group's founding CEO, is being replaced by Mike Zaneis, the IAB's exec VP-public policy and general counsel. Mr. Zaneis will retain his position with the IAB. At some point, the group says it will look to replace Mr. Zaneis.

"We are grateful for Linda's leadership in helping TAG build a foundation as the leading cross-industry effort to address ad fraud, malware and IP piracy concerns," Mr. Zaneis said in a statement.

Ms. Woolley said in a statement that she is "pleased" Mr. Zaneis will be leading the group.

"We stood up the TAG program and announced a robust and innovative anti-piracy program," said Ms. Woolley, in a statement. "Work plans for addressing malware, fraud and other issues are in place, and they are ready to be operationalized. I'm pleased that Mike will provide a seamless transition in carrying on the work of TAG as it moves forward."

TAG stands for Trustworthy Accountability Group and is a joint effort between the Interactive Advertising Bureau, the American Association of Advertising Agencies and the Association of National Advertisers. The organizations committed a total of $1.5 million in funding to help found the group last year.

Ms. Woolley promised bad actors would be put in a "penalty box" in a speech last November, but as Ad Age noted last month, the penalty box remains empty and is unlikely to be occupied anytime soon.