The latest destination for social media influencers is an abandoned city devastated decades ago by a nuclear disaster.

Thanks to the popularity of HBO’s miniseries “Chernobyl,” travel to the Ukrainian ghost city has reportedly spiked, and influencers are visiting the site of the 1986 nuclear plant explosion.

Amid the ruins of Chernobyl and its environs, visitors are sharing pictures of themselves wearing radiation suits in front of rusted fairgrounds or staring contemplatively out at the forsaken city. On Instagram, posts are tagged with hashtags including #Chernobyl, #ExclusionZone and #nucleardisaster. (Radioactive isotopes linger in the air there, but nuclear experts consider the pollution tolerable for people visiting for limited periods of time.)

The Instagram account @juliabaessler—which is followed by 319,000 people and typically posts shots of a woman in bathing suits or gym clothes—shared a series of Instagram posts and Stories of the same woman deliberately posing in front of the ruins. 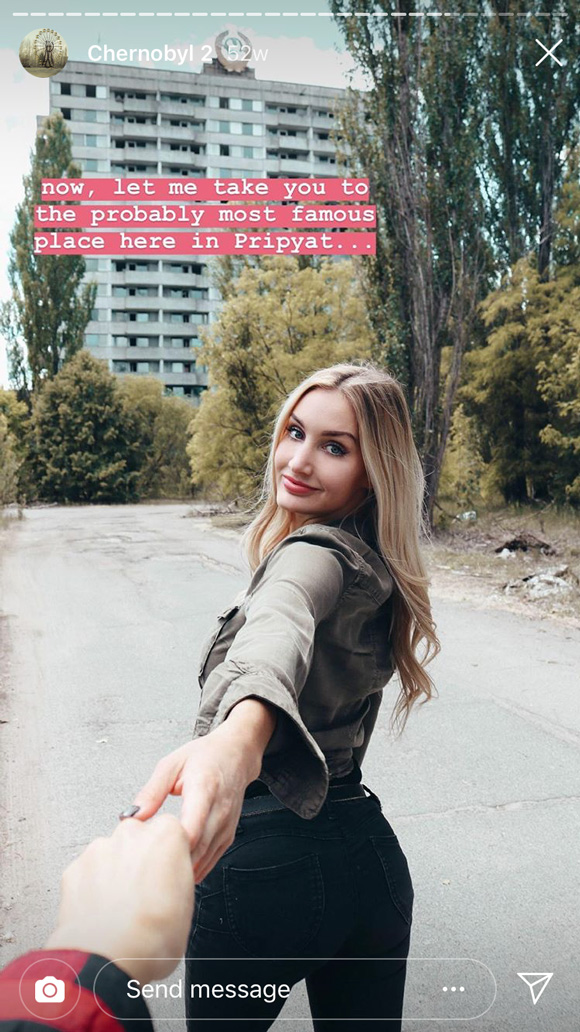 Some people have received hundreds or thousands of likes for their photos.

The Worst Nuclear Disaster Of All Time

The @nz.nik account showed a woman stripped down to her underwear at the site.

The shots seem disrespectful to some observers, and critics on social media are shaming influencers for using the tragic site for self-promotion. In 1986, Chernobyl was the setting of the world’s worst nuclear plant explosion, which forced the evacuation of tens of thousands and killed at least 31 people directly; the full death toll from radiation-related illnesses is unknown.

Influencers visiting Chernobyl with a photographer and lighting team...jettison me off this planet pic.twitter.com/gZI82ziedt

“Using the exclusion zone for the performance of vanity shows an *incredible* lack of awareness for the tragic circumstances that made ‘photogenic,’ wrote @TweetingBogart.