Instagram Is Now Publishing a New Ad Almost Every Day

GE, Lexus, Levi's and Ben & Jerry's Are the Latest Advertisers
READ THIS NEXT
Google urges holding companies to buy analytics firms amid loss of talent

Advertising on Instagram has quickly moved from a novelty to a near-daily occurence, and they're churning up a tsunami of "likes" as well as a dose of aggrieved user comments.

General Electric, Levi's, Lexus and Ben & Jerry's have now posted their first ads to the mobile photo- and video-sharing network, which are being targeted to a broad audience, according to a spokesman. (Michael Kors became the app's first advertiser earlier this month.) The only targeting parameters in play are age and gender, which are applied from what Instagram users have entered in their Facebook profiles. 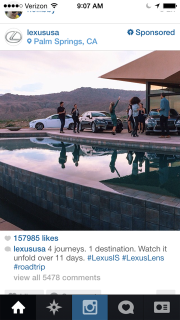 At first blush, the results are good. Some of the ads -- which are mainly aspirational, belonging to the genre found in high-fashion magazines -- have garnered hundreds of thousands of likes and an influx of new followers for the brands. Michael Kors, for example, gained roughly 34,000 new followers 18 hours after its first of four ads published, according to Instagram analytics firm Nitrogram. (It posted more big follower gains for the subsequent three ads and currently has more than 1.4 million followers.)

But like its corporate parent Facebook once found, Instagram will now be charged with explaining what value those likes and follows actually yield. It's already pushing out surveys on behalf of advertisers to a group of users who've seen the ad, as well as a control group that hasn't, the day after each campaign ends to gauge metrics like ad recall and brand awareness, according to an Instagram spokesman.

Instagram won't disclose the reach of its ads, but it appears to be considerable based on the number of likes they've racked up. Take the Ben & Jerry's picture of a man's hand holding a pint of "Scotchy Scotch Scotch," a limited time offering inspired by the Will Ferrell character Ron Burgundy. Posted Saturday, it currently has 249,000 likes along with upwards of 6,500 comments. And Lexus's sunset poolside vista snapped in Palm Springs, Calif., has 185,000 followers with nearly 6,000 comments.

While comments contain their share of invective that rails against the premise of Instagram advertising, plenty of users express appreciation of the images in the various ads.

To assure that image quality is high and in keeping with the app's aesthetic, Instagram has a review process in place where every ad will be evaluated before it's eligible to be put in front of users. Whether it can maintain that high bar as it tries to scale the business remains to be seen.

Nitrogram analyzed the sentiment of comments appended to Michael Kors's four ads and found there was a roughly equal mix of positive and negative comments on the first. But the percentage on the positive side swelled to 73% for the second ad; to 89% for the third; and to 64% for the fourth.