From the Busiest Hour to Biggest Referrer, a Few Tips for Optimizing Content on iPads
READ THIS NEXT
Facebook's Carolyn Everson opens up about the boycott, that Trump post, and actions vs. lip service

In late December, an eMarketer report confirmed that the long awaited mobile ad spend boom had finally arrived. Mobile, the report said, drove nearly all digital advertising growth in 2013. And the mobile pie is expected to grow by another $5 billion in 2014. 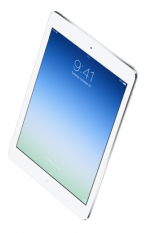 For publishers looking to capitalize on this spending surge, understanding how to optimize for mobile behavior is essential. The category includes tablets, so Ad Age spoke with Jason Baptiste, the founder and CMO of mobile publishing platform Onswipe, to glean some need-to-know information about iPads. Here are the four key stats based on an analysis of billions of iPad pageviews Onswipe saw across 120 million unique iPads in 2013.

Email is the most used sharing mechanism on the iPad

You read that right. Email, not Facebook or Twitter or Pinterest, is by far the most used channel to share content on iPads. Of all shares on the Onswipe platform in 2013, 54.5% occurred through email, with 28.7% and 13.5% occurring on Facebook and Twitter, respectively. Pinterest, the third most popular social media website in the U.S. according to Pew, registered 3.23% of shares. "What surprised us the most is the way that people share," said Mr. Baptiste. To capitalize on the behavior, he said, publishers should stress email sharing in their social calls to action.

"Google is actually a hugely dominant force on the iPad," said Mr. Baptiste. Not only did Google refer more than twice as many visitors to publishers than Facebook in 2013, but those visitors stayed far more engaged. Google search visitors to the Onswipe platform, Mr. Baptiste said, consumed two times more pageviews per visit and spent two time as much time on site, clocking in at 4 minutes 8 seconds on average. For publishers looking to attract and keep an audience on iPads, Mr. Baptiste said, search engine optimization should not be ignored.

The busiest hour on the iPad is 9 p.m. to 10 p.m. Eastern Time, according to Mr. Baptiste. Publishers looking to publish stories optimized for an iPad readership should keep that in mind. The most thoughtful hour on the iPad is midnight to 1 a.m. Eastern Time, where readers spend over seven minutes on average with content, the longest of any hour during the day. The midnight hour, said Mr. Baptiste, is the best time to publish longer, insightful, journalistic pieces. Leaving them up on the homepage or section fronts may bring an extra bump in the morning, another time of peak engagement, Mr. Baptiste said.

iPad owners love men's lifestyle content, spending 5 minutes and 43 seconds on site when visiting that type of content, the longest time among 16 categories Onswipe measured. Also performing well was business/finance, which saw 5 minutes 8 seconds time on site. The average time on site for iPads is 4 minutes 21 seconds, according to Onswipe. Publishers that have men's lifestyle or business content might want to consider publishing it during the iPad's peak hours for a double lift, Mr. Baptiste said.