Who Was Behind @Irene? An Agency, Of Course. | Ad Age
Skip to main content
Sign In Register

Who Was Behind @Irene? An Agency, Of Course.

Hi, I'm @Irene. I've been the proud owner of this Twitter handle since 2006. Who knew that having one of the few, coveted first-name handles would veer my usual opining about social media as a product strategist at HUGE into the voice of a threating storm headed right for the East Coast. Hi there you 11,000 new followers!

Friends started retweeting the post, and more and more people started seeing it and following my account. By Friday morning, that tweet was reshared more than 100 times. I didn't think much of it.

But I wasn't the only one watching my reply messages on Twitter. Later that afternoon, the colleagues that help run HUGE's company Twitter account @hugeinc, Ross Morrison, an associate creative director, and Bjorn Larsen, a copywriter wanted to borrow my identity. "Just for the weekend," they said.

Ross had found a photo of me on Buzzfeed with the caption:"@Irene Is A Real Person, Not The Hurricane."

At my trepidation, they couldn't understand why I wouldn't want to make the most of this serendipity. But their lobbying and a little nudge from our exec-creative director Joe Stewart had me turning over my Twitter reins by evening.

So they set a plan to give the tweeting masses exactly what they wanted: an accessible personification of the hurricane herself. But impersonating a hurricane is different than impersonating an escaped cobra. And I certainly wasn't going to lend my personal account to any effort that was insensitive to those who might suffer as a result of the storm. 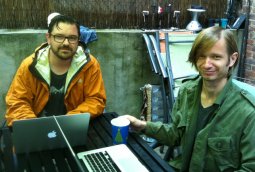 So the account became a venue for more than just jokes. We wanted to be a central resource for updates and warnings about the hurricane. Our team even liaised with FEMA and offered to give them access to the account if they should need it as the storm developed.

The first hurdle, though, if we really were going to imitate a huge threat to property and safety without pissing anyone off was tone. @Irene had to have a female point of view. She had to be a self-aware disaster who understood her potential to cause devastation and that she had no control over her actions. (We all had decided earlier that if things turned ugly, the tone would shift accordingly.)

With CNN on in the background and Twitter providing all the real time information they needed from official sources, Ross and Bjorn made jokes about the coverage of the storm, but also posted relevant information from sources like FEMA and the mayor's office.

Holed up in Ross' Brooklyn apartment, they kept it going for two days through the storm's march up the coast, finally shutting it down and turning it back over to me shortly after the tropical storm left the country. During that time, the number of people following @irene shot up to almost 11,500 from around 630 prior to the hurricane.

So for a few days my usual agency soapbox was turned into an anthropomorphic character, a phenomenon that would receive immense attention. The least we could do was be helpful and funny. As @vosdscott pointed out in a tweet this weekend "Naming hurricanes may never be the same if this woman who turned her @Irene Twitterfeed into a helpful but lighthearted parody succeeds."

Our agency learned a couple of important things from this exercise. The first is that companies need to be set up to take advantage of these opportunities if they're going to succeed in social.

We found out about this on Friday afternoon and decided in the space of 30 minutes that this was how we were going to be spending our weekend. Rather than bogging this down with a question sent to the lawyers about "what are the implications if we do this?" Our Twitter team at work had experience and trust from management to know how to tread what was a pretty fine line. We were structured in a way that we had the ability to seize this opportunity.

The second is that we didn't use it to promote ourselves or to promote Irene. We used it to provide what people actually wanted and needed: an entertaining aggregator of key news related to the hurricane and a little entertainment while they were cooped up inside. If we had tried to be promotional or take advantage of the opportunity for our own ends it would have failed.

With that -- and NOAA's list of names for 2011 Atlantic hurricanes in mind, @jose should probably keep his eye on The Weather Channel.

Irene Tien is a senior product strategist at digital agency Huge in Brooklyn. You can follower her on Twitter at @Irene.

Irene Tien
View all articles by this author