EBay Should Have Done 'Extreme Vetting' of Ken Bone 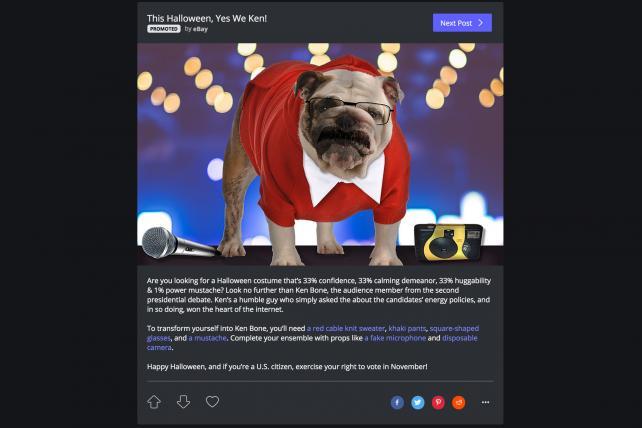 An eBay ad on Imgur latched on to debate star Ken Bone's legend.
Credit: via Imgur

Ken Bone has gone from internet fame to internet shame, unfortunately for brands capitalizing on his 15 minutes.

EBay, for example, made a brilliant post for Imgur that capitalized on the debate night "hero" meme -- brilliant until his "hero" stock took a dip.

Mr. Bone as we all now know, regrettably, was the stocky, balding, red-sweatered, undecided voter at the last presidential debate. He got to ask Hillary Clinton and Donald Trump a question, becoming the "Left Shark" or "Alex from Target" of the debate.

But Mr. Bone apparently required extreme vetting before brands got too close. EBay pulled the ad after the Bone backlash swelled.

Marketing specialists said these types of incidents could be avoided simply by double-checking a subject's digital history.

"Any marketer that is using data well can and will take five minutes to vet any potential influencer before they work with them to easily avoid problems like this," said Baker Lambert, global data director at TBWA Worldwide.

Although eBay wasn't working with Mr. Bone directly, it made an Imgur post highlighting all the Ken Bone-ish items available for sale, such as red sweaters, that would make a good Ken Bone Halloween costume.

Mr. Bone also was promoting himself heavily, hawking a "Bone" T-shirt and becoming a spokesman for Uber Select in St. Louis, Mo. (initially posting about the brand in social media without a FTC-required disclosure such as "#ad").

"When brands try to capitalize on meme culture like this," Mr. Lambert said, "They run an extra risk if they use a paid promotion approach, as it can convey an implied endorsement of the meme or influencer to the public."