The open-source software revolution is coming to the car.

Most in-vehicle infotainment systems sold today use proprietary software, with the underlying code tightly controlled by automakers and by a few major software providers, such as Microsoft Corp. and Ottawa-based QNX Software Systems. 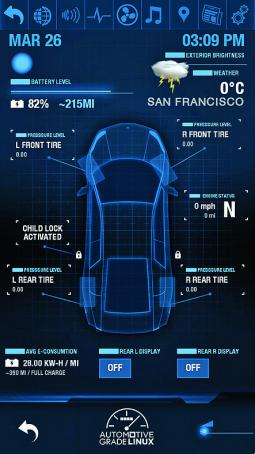 Now the auto industry is exploring open-source operating systems such as Linux more seriously than ever, hoping that sharing the work and making code available to all will lead to more rapid development cycles, lower costs and happier drivers.

Car companies "are falling behind other mobile devices, and they know it," said Dan Cauchy, general manager of automotive at the Linux Foundation, a San Francisco nonprofit. "If you're buying an infotainment system for a couple grand in your car, it's one of the most expensive purchases that you make. You want it to be on par with your mobile phone."

That is the goal of Automotive Grade Linux, a 2-year-old project run by the Linux Foundation along with Toyota, Hyundai, Nissan, Jaguar Land Rover and dozens of software companies and automotive suppliers.

In June, the AGL coalition released its first production-ready software kit. Mr. Cauchy said it now takes about 42 months to develop an infotainment system, but Automotive Grade Linux's developers hope it will speed the cycle to that of smartphones: six to 12 months.

Linux is gaining more attention now that production cars, such as the 2014 Kia Soul and the 2014 Lexus IS, are starting to move to Linux-based infotainment systems.

QNX, owned by Toronto-based BlackBerry, the seller of BlackBerry smartphones and tablets, has a dominant position in automotive operating systems with a market share of more than 50%. Andrew Poliak, director of automotive business development at QNX, said that reflects the company's long-standing ties to car companies and a proven record of safety.

Its operating system is used in environments -- such as nuclear reactors -- with even more rigorous reliability demands than cars. Still, the company sees Linux as a rival because automakers are looking for choices to avoid being locked into QNX.

"Linux has a lot of development behind it, a lot of mind share and a lot of passionate people," Mr. Poliak said. "It's going to be a competitor."

He said open source can be risky, though, because anyone, even a malicious hacker, has access to the code. QNX keeps the core of its operating system, called the "kernel," proprietary for security and competitive reasons.

But the allure of open source, which requires no royalties, may prove to be strong. Mr. Cauchy said that once automakers fully customize Automotive Grade Linux with their own style and features, they may discover there's no need to go their own way.

"You don't need to reinvent the wheel by having your own" user interface, Mr. Cauchy said. "The automotive guys get that now."