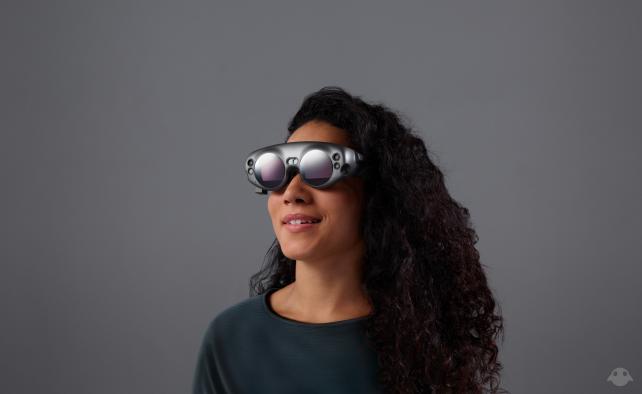 Magic Leap has quietly begun sending its mysterious augmented reality headsets into the wild. A small group of software developers recently received devices at their offices, according to people familiar with the matter. But access to the gadget comes with an usual caveat: They must commit to keeping them in locked safes.

The Plantation, Florida-based startup is anxious about losing control. Magic Leap has gone to great lengths to maintain a cloud of secrecy around the product. The spread of devices is a prelude to the company's plans to begin shipping kits to a wider population of developers, something it has promised to do later this year.

Magic Leap is the most prominent startup working on augmented reality, technology that makes it appear as though three-dimensional digital objects exist in the physical world. It has raised more than $2.3 billion, making it one of America's top-funded tech startups in recent years. It's developing and manufacturing parts for the headsets in facilities in Florida while seeking to create a software platform around it.

The first devices look like bulky safety goggles dotted with small camera lenses. They work in conjunction with a small computer that clips to a user's belt and a wireless controller that somewhat resembles a television remote. The security requirements associated with being an early user were deemed too burdensome by some developers. At least one company decided it wasn't worth the hassle and declined a test device, said a person familiar with the matter, who asked not to be identified due to Magic Leap's tight information rules.

A Magic Leap spokesman confirmed the company has given out a limited number of devices to partners and has not started distributing them widely. Up to this point, the startup has only allowed people to use the product in tightly controlled environments. Investors, potential business partners and journalists who have used prototypes typically have only been able to do so after signing nondisclosure agreements. The persistent secrecy has led to growing skepticism about the company's ability to execute. The view of a profligate startup struggling to make good on its promises has been reinforced by unflattering information leaking out through litigation with former employees.

People at the company have complained privately that criticism has gotten out of hand. Its main competitors in the race to build an augmented reality platform are the world's largest technology companies, which can obscure the expense of their efforts within multibillion-dollar operations. The current gold standard for augmented reality devices is Microsoft's HoloLens, which was released to developers two years ago for $3,000 to $5,000.

In September, Bloomberg reported that Magic Leap is shooting for about half that price—between $1,500 and $2,000. The specs are roughly in line with the first-generation HoloLens, people familiar with the matter now say. The headset is designed to be used primarily indoors, in part because of the challenges of dealing with bright light.

The biggest difference between Magic Leap's and Microsoft's headsets is the way they create the illusion of depth. Previous iterations of augmented and virtual reality headsets do this by showing slightly different versions of an image to each eye. The Magic Leap One, the name of its initial product, goes an extra step by slightly blurring objects depending on their distance from a user's gaze. This mimics a function of the human eye. If developers take full advantage of this capability, the difference can be as significant as a TV in standard or high-definition, one of the people said.

Out of the background

Keeping developers excited about the potential is key. For Magic Leap to succeed, the company needs apps and content custom-made for its hardware. It has been building some of those apps in-house, while also signing up big-name partners like the National Basketball Association and the Weta Workshop, the special effects artists behind the Lord of the Rings trilogy.

At the Game Developers Conference last week, Magic Leap released tools allowing independent developers to start working on apps. It also hosted a series of events to get them fired up about doing so. It was a contrast to previous years, where Magic Leap mostly lurked in the background.

In one session, Magic Leap showed photographs of its prototypes over the years. The first one dated to 2014. The device, then called "the big bench," looked to be larger than a person. It looked like a machine designed to administer eye tests. By the following year, Magic Leap was testing something it called the Cheesehead, presumably because it was the size and shape of the cheese-wedge hats worn by Green Bay Packers fans. It wasn't until last year that the devices even vaguely resembled the headsets the company is shipping now.

Magic Leap representatives walked conference attendees through the novel artistic challenges they'd face. Brian Schwab, director of Magic Leap's interaction lab, urged developers not to fill up people's field of vision with so many digital objects that they'd lose a sense of the real world. "You can't consume them," he said. "You need to let me notice when their dog comes up."