As Price of Granting Wishes Goes Up, Make-A-Wish Goes Digital

Nonprofit Partners With PwC, Has Plans to Expand Globally
READ THIS NEXT
Google thinks it may have found a replacement for third-party cookies 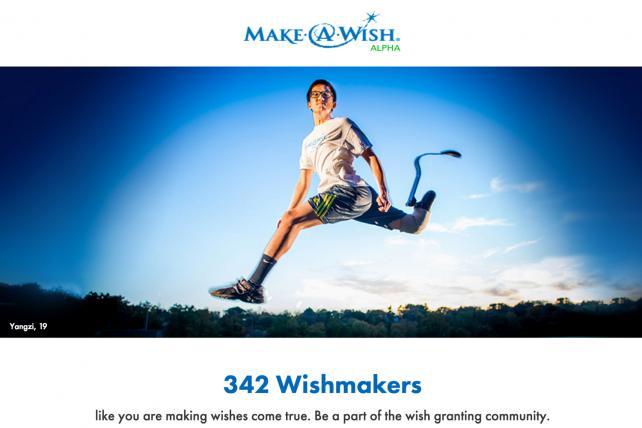 The cost of a wish is going up.

To keep on top of its wish-granting game, Make-A-Wish is turning to digital crowd-sourcing as a fundraising tool and backing it with an aggressive push that will encompass channels like Snapchat, Instagram, Twitter and TV -- as well as the foundation's celebrity influencers. And it's partnering with PricewaterhouseCoopers for its digital and marketing efforts.

The amount it takes to fulfill a wish has been increasing every year since Make-A-Wish opened its doors 36 years ago. The latest figures provided by the nonprofit reveal the average price to grant a wish is $10,130, up more than 30% from 2010 and an uptick of 7% from the previous year.

Despite this, the organization intends to push forward with plans to further expand globally. Yet to get there, it needs to be raising $400 million a year by 2020, a 30% increase over the $300 million it raised in 2015.

Make-A-Wish turned to PwC to make its digital play. For the first time, Make-A-Wish will launch a crowdfunding platform called Wishmaker, which will allow people to donate money toward a specific child's wish. Donors could previously make online gifts to the organization, but by sharing a child's story and image, the organization feels it will be able to drum up the funds it needs to expand both in the U.S. and abroad.

"This is historical for us," said John Vranas, VP and CMO at Make-A-Wish. "If you look at the GoFundMe model, it is over $2 billion a year of people helping other people. It's a perfect segment for us to look at. We help people every 35 minutes and now you can be a part of that."

As it stands, Make-A-Wish makes 15,000 donations to children in the U.S. each year and about 14,000 wishes abroad. The organization is in 50 countries, including Canada, Australia and the U.K. "We also have founding countries," Mr. Vranas said. "They are like startups. We did 5,000 wishes in India last year."

Wishmaker will be "aggressively" marketed through channels like Snapchat, Instagram, Twitter and TV. In the coming months, the organization will also tap into its vast network of celebrities and influencers to help raise awareness. For TV, it's hoping the individual stories will generate earned media. The website will also be optimized for mobile and in the near future, will allow people to donate using Apple Pay.

"The biggest push for us is we have a bolder vision of where we want to take the organization in the next three or four years," said Ryan Hegseth, VP of strategy at Make-A-Wish. "And to get there we have to really accelerate and ramp up our fundraising and revenue growth. We've done a great job in last several years of growing revenue, but we really needed to be creative and think out of the box."

"We are a little late to the party, if you will, but timing maybe wasn't right for the organization to embrace this strategy until now," he added.

Generally speaking, once a child is deemed eligible for a wish, the organization does not turn down wishes, regardless of how extravagant they may be. Much of the increase has to do with the different types of wishes it's seeing as oppose to 10 years ago. "We are seeing that less children want to have shopping sprees and seeing more children who want to travel," Mr. Hegseth said. "That's the biggest driver, the changing dynamics of wishes themselves and what children are looking to ask for."

"I think there are also new wish types that come up that while they are not high volume, they are high cost and are more like the outliers," he added. "The outliers are a relatively small number, but they are also a growing number."

David Clarke, chief experience officer at PwC, said Wishmaker will aim to make connections that weren't necessarily possible before. "Imagine you're a firefighter and you're in the midwest," Mr. Clarke said. "And there's a child in Florida who wants to be a firefighter for a day. That's the connection we want to make." If a particular wish exceeds its goal, the extra money will go toward other wishes.

"We've reframed how Make-A-Wish thought about bringing donors in," he added. "They have historically been very legacy, where people are giving large amounts of money. But in the future, maybe people will give less, but it will be more frequently and over longer periods of time."

Other funding sites, Mr. Clarke said, aren't in the wish-granting business. Rather, "they are collecting" money. "There is also something highly credible about how Make-A-Wish operates," he said. "You have to have that human touch, that human element."

Right now, Wishmaker is in "pilot zero." Mr. Clarke said without any promotion or earned media, Wishmaker has gone from making 100 wishes possible to 172. The platform now sees about 65 donations a day. "We haven't publicized the launch," Mr. Clarke said. Make-A-Wish expects a firm launch date by the end of October.

"There are a lot of well-known celebrities who are involved with Make-A-Wish and I think once they start really getting their arms around it, and start adopting these wishes, we will see exponential growth pretty quickly," he said.

"The whole premise of what we built is for scale," Mr. Clarke said. "We have the ability to go very micro and go very macro very quickly. This program is localized, geo targeted. It can go regional, national and eventually, global."