Why Marketer Love for QR Codes Is Not Shared by Consumers

Quick-Response Codes Tuck Media Neatly Into an App, but Only 5% of Americans Have Actually Used Them
READ THIS NEXT
WhatsApp delays updated privacy policy after user confusion, backlash

Quick-response codes are everywhere these days, even the soccer field. This fall, a squad of London footballers shaved the back of their heads in the design as a promotional stunt. But consumers are not nearly as excited about QR codes as marketers are.

The codes are a great idea in theory. They let marketers make all sorts of media -- print, billboards, even packaging -- clickable and interactive. When scanned with a special app downloaded to a smartphone, QR codes can call up links, text messages or videos. They can spark e-commerce or generate a lead.

Enterprise Rent-A-Car has a QR code on its keyrings offering more information on the car.
But in practice, while QR codes are affixed to everything from rental cars to Bratz dolls, only 5% of Americans who own mobile phones actually used the 2-D barcodes in the three months ending July 2011, according to Forrester Research. And those 14 million early adopters tended to be young, affluent and male.

Experts cite three reasons that QR codes haven't caught on. First, people are confused about how to scan them. Two, there's little uniformity among the apps required to read them. Last, some who have tried the technology were dissuaded by codes that offer little useful information or simply redirect the user to the company's website.

None of this deters marketers, who seem to be slapping the codes on products for all age groups and demographics.

The QR phenomenon is "another instance of shiny-object syndrome," said Melissa Parrish, Forrester's senior analyst-social and mobile marketing. "Something becomes trendy or sexy, and marketers feel they have to jump onboard to position themselves as innovative and make sure they don't fall behind."

Car-rental outfit Enterprise pasted QR codes on the driver-side windows of 1 million of its North American vehicles so passersby can get more information about the automaker.

JC Penney put the codes on holiday tags so that gift-givers could include a recorded greeting on the box -- one of many QR-code programs from the retailer. 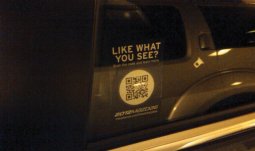 Codes should be accessible, and users should be rewarded for scanning them.

QRblaster.com, which generates codes, published a list of the worst campaigns of the year. It included marketers and publishers with unreadable or obscured codes. Some were offered in areas with no internet access, which means a scan cannot load anything to the phone. Red Bull put QR codes on the subway, and United Airlines had them on in-flight magazines read primarily far outside cell-service range.

In a well-meaning misstep, MillerCoors partnered with Seattle bars and restaurants over the holidays so that patrons who had imbibed a bit too much could snap a QR code to get a cab. The effort assumed that revelers still had enough dexterity to aim a phone and get a clear shot.

"Marketers fall in love with tools and forget the reality of how they're used," said Ms. Robertson at AKQA.

The appeal to marketers is clear. Implementing the codes is far less expensive than developing a proprietary app. They offer the ability to measure consumer activity and can provide shoppers with information, freeing up salespeople and increasing productivity.

But what's the risk of the many QR codes that are unhelpful, don't work or are so complicated that it would be easier to enter a URL?

"If you are not paying off [the QR scan] with content that 's rewarding or valuable, then the experience falls flat and consumers won't use it again," Ms. Robertson said.

Despite low usage, marketers are staying loyal to QR codes.

Home Depot, for example, put QR codes on plants this spring so that customers could learn more about the items and which go best together.

A spokeswoman for the home-improvement retailer acknowledged that adoption has been slow, but the company continued to test the technology on artificial Christmas trees and lights.

"I haven't found any brands that have totally scrapped the codes," said Ms. Parrish at Forrester.

Education may also be an answer. Last spring, Macy's did national TV ads on its QR codes, and shoppers who scanned them got informational videos from clothing designers. The initiative exceeded expectations and got positive customer feedback, according to a spokeswoman. Use of the codes tripled after Macy's tweaked the content and offered shorter videos in the fall.